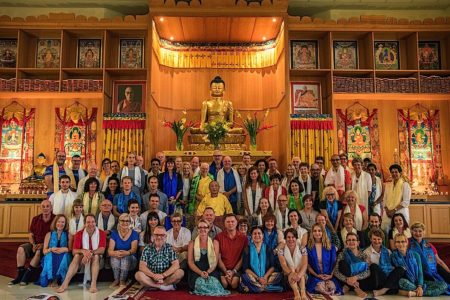 Venerable Zasep Tulku Rinpoche (center) surrounded by students at a teaching in Tibetan Buddhist Society Temple in Perth, Australia March 2017. Rinpoche tours extensively to deliver precious teachings. He is in Mongolia currently, and will be in Vancouver in April 2017 at Zuru Ling and in Toronto in May at Gaden Choling.

In the eighth in a Buddhist practice video series, “Advice from the Teachers”, the Venerable Acharya Zasep Tulku Rinpoche, Spiritual Head of Gaden for the West Centers, answers a student’s question [play video below]:

What practical advice would you give to a new student to purify their mental difilements and bad karma? Can you speak about Vajrasattva purification? 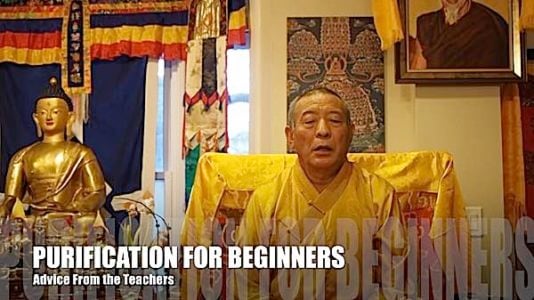 According to Sutra, basically, meditation itself is the purification. According to Pali tradition its called ‘Visudimada’, Path of Purification, and you meditate every day, cultivate awareness, mindfulness — that would be very good for purifying the mind.

Also, I would suggest one should practice ‘Metta’ and ‘Karuna’, loving kindness. Meditate on love and compassion, for yourself, for others. That will purify our mental defilements and purify our karma.

According to Tantra, one of the most powerful purifications is meditations on Vajrasattva. Recite the mantra of Vajrasattva, the 100-syllable mantra [mantra below transcript]. If you don’t have initiation, you can say the mantra, no problem, you can visualize Vajrasattva in front of you. [Or] Above your crown, as well. 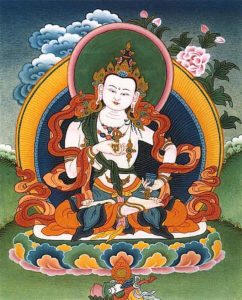 To help purify and meditate on our obscurations, negative karmas and obstacles, Rinpoche recommends Vajrasattva meditation. Visualize Vajrasattva (pictured above) over your head or in front of you, with white light or nectar coming from his heart into your body through the crown of your head. Realize and imagine that the nectar purifies all negativities.

Imagine — as you say the mantra — imagine purifying nectar coming from the heart of Vajrasattva, and the nectar enters through your your crown [of your head] and enters into your body, first purifying the body. The nectar flowing down through the body. And as if flows down it purifies all the bodily karmas: disease, sickness, unwholesome karmas of the past, unwholesome karmas of the bodies are purified. Say the mantra, lets say 21 times.
Then you do the purification again, this time purifying the speech, the speech karmas. This time, the nectar comes down from the heart of Vajrasattva dissolves into you, into your body, and slowly fills up your body, and then [you visualize] the unwholesome karmas of the speech coming out from the mouth. They are expelled. Gone. Imagine your speech karma is purified.

The third time, nectar comes down from Vajrasattva’s heart, dissolving into you directly into your heart, and then you mind is purified, mental karmas such as fear, attachment, ignorance, and confusion disappear, are dispersed. Disappeared straight from your heart. This is very powerful.

Say the mantra, the 100-syllable mantra of Vajrasattva, and then imagine Vajrasattva becoming smaller and smaller entering through your crown and dissolving into your heart. Imagine Vajrasattva is always with you as a personal yidam deity. This is very powerful way to purify your body, speech and mind. There are other purifications, but I think this is good enough for the beginner.”

In Part 9 of this Series, students ask Rinpoche the question: “What advice do you have for senior (advanced) students for their daily practice? Can you merge practices to simplify?”

100-Syllable Vajrasattva Mantra for Purification of Negative Karmas and Obstructions

For example, “TVENOPATIṢṬHA” is pronounced “T-ven-oh-pah-teesh-t-ha” (ending in “ha” not “tha”). Likewise, for “Phat” this is pronounced “puh – hat” (p, then hat) but as an forceful exhalation. For guidance listen to the video below.

The most excellent exclamation of praise, the qualities of Buddha’s holy body, speech, and mind; all that is precious and auspicious. Vajrasattva, you whose wisdom is inseparable bliss-emptiness, 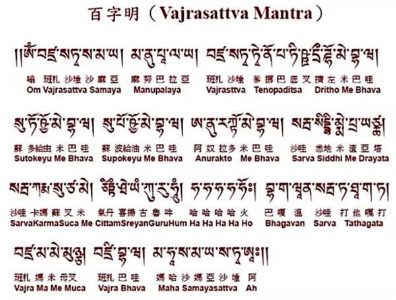 And whose pledge must not be transgressed, lead me along the path you took to enlightenment,

Make me abide close to your holy vajra mind,

Please grant me a firm and stable realization of the ultimate nature of phenomena,

Please grant me the blessing of being extremely pleased and satisfied with me,

Bless me with the nature of well-developed great bliss,

Bless me with the nature of love that leads me to your state,

Please grant me all virtuous actions and your glorious qualities,

Seed syllables of the four immeasurables, the four empowerments, the four joys, the four kayas, and the five wisdoms, 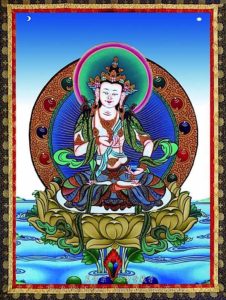 Do not abandon me,

Grant me the nature of indestructible union, the realization of your vajra nature,

You, the great pledge being with the holy vajra mind,

Make me one with you. Syllable of uniting in non-duality.

Syllable of the wisdom of great bliss.

Syllable that clarifies the wisdom of inseparable bliss-emptiness and destroys the dualistic mind that obstructs realization.


Tibetan version of 100-syllable mantra with pronunciation and English (rough) translation (Should not generally be chanted in English. This is just for reference): 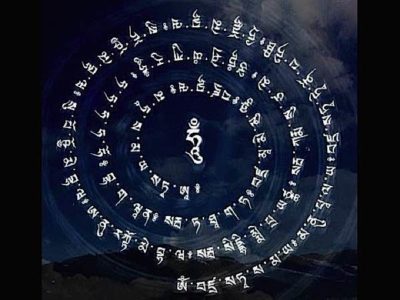 In advanced Vajrasattva practice, we visualize the full 100-syllable mantra in Tibetan characters surrounding the seed syllable Hum, emitting purifying light and nectar from the heart of Vajrasattva.

OM
Syllable of the most supreme exclamation of praise.

TE NO PA TISHTHA DRI DHO ME BHA WA
May you remain firm in me.

SU TO KA YO ME BHA WA
Grant me complete satisfaction.

SU PO KA YO ME BHA WA
Grow within me (increase the positive within me).

ANU RAKTO ME BHA WA
Be loving towards me.

SARVA SIDDHI ME PRA YATSA
Grant me all the accomplishments,

SARVA KARMA SU TSA ME
As well as all the activities. 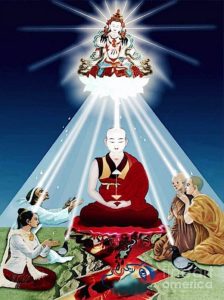 As you chant the mantra, visualize white light or nectar coming from Vajrasattva and entering your body, purifying all negativities.

Syllable of the heart essence, the seed syllable of Vajrasattva.

HA HA HA HA
Syllables of the four immeasurables, the four empowerments, the four joys, and the four kāyas.

HO
Syllable of joyous laughter in them.

BENZRA MA ME MUNTSA
Do not abandon me.

BENZRI BHA
Grant me realization of the vajra nature.

Video 1: Advice for Students on Karma>>

Video 2: Advice for Students dealing with loss of a loved one>>

Video 4: Advice for Students coping with the loss of a beloved pet>>

Video 5: Advice for Students coping with aggressive illnesses such as cancer, looking for supportive practices>>

Video 6: Advice for the New Student to Buddhism>>

Video 7: Advice for Keeping Motivated in Your Daily Practice>> 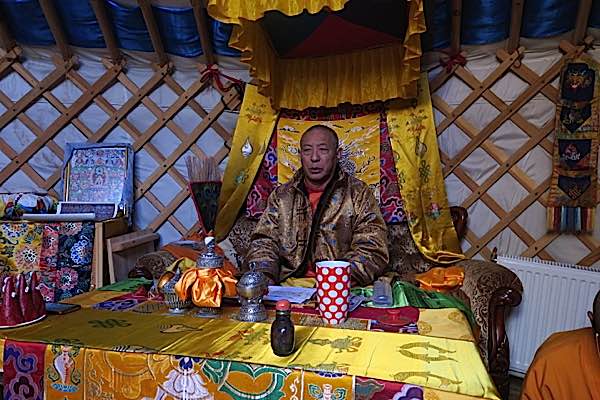 Zasep Tulku Rinpoche is currently teaching in Mongolia (photo of teaching in a traditional yurt (tent) April 2017), after several weeks of intense teachings all over Australia. in April he will be teaching in Zuru Ling Vancouver, and beginning May 20, Rinpoche will teach at Gaden Choling Toronto for two weeks in 2017. 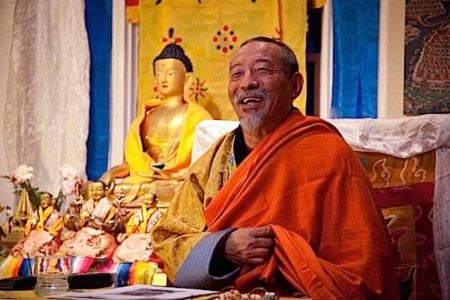 “Don’t misunderstand the Buddha.” What Buddha actually taught about “rebirth” and life after death.

Mangala Sutta: The Sutra on Happiness; Buddha teaches the 11 blessings, those things which bring happiness 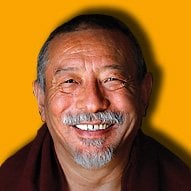 Rinpoche is spiritual head of many Dharma Centres, and teaches around the world. Originally from Kham province in Tibet (born 1948) Rinpoche has taught in the west since 1976, after he was first invited by Geshe Thubten Loden and Lama Yeshe to teach at the Chenrezig Institute in Australia. Today, he is spiritual head of the Gaden for the West centres in Canada, U.S., and Australia and also spiritual director of the the charities Gaden Relief Project (Canada) and Manlha Tus NGO (Mongolia). He is the author of three books, including his latest release in 2018 with a rare English commentary and practice instructions for Gelug Mahamudra.