“A prostration based on the perception that Buddha has a separate self from your own, and that you have a self separate from the Buddha, can only be called superstition,” wrote Thich Nhat Hanh, one of the world’s most noted teachers.

The teacher explained that when you bow to or pray to an image of the Buddha, the World-Honored One “or any image of whomever you pray to” you have to visualize because the Dharma object, statue—regardless of precious material or size—is nothing more than a symbol. 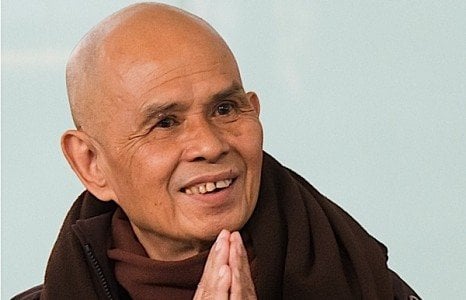 The most Venerable Thich Nhat Hanh.

“The one who bows and the one who is bowed to are both, by nature, empty,” which is a one-line prayer widely used by Buddhists around the world.

The power of emptiness

Whether one thinks of both the Buddha and the self as Empty—a confusing subject to some—another way to understand the power and emptiness of prayer is to understand that “we are not a separate reality” from the Buddha. If you struggle with the concept of Emptiness, as many do, it’s easier to understand the concepts of “collective consciousness”—as taught both in Buddhism and as expressed by noted psychologist Carl Jung. 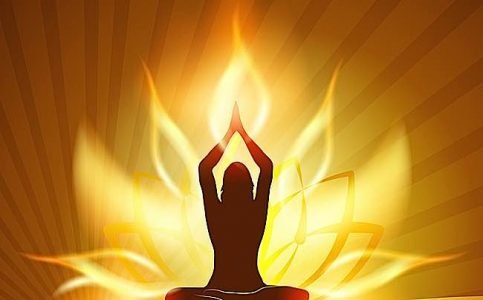 The energy of mindfulness

The energy of mindfulness is a very real energy and “when we create the energy of mindfulness, we are able to pray.” There is no need for complex ritual or formula or a trip to a temple to connect with the Buddha. Buddha is omniscient, and is already plugged in to your mind, because your mind is part of Mind. The Buddha is in you, not without you. Prayers are empowered simply by thought. 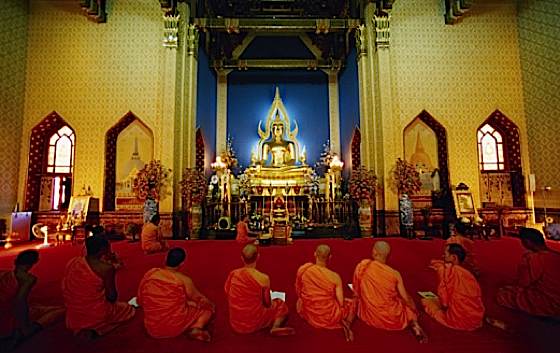 Monks praying in a temple. The word prayer isn’t truly the correct English word, but for many of us it is easy to think in these terms. When Buddhists “pray” who are we praying to? Sogyal RInpoche teaches “We think of Buddha as not being outside self, but within.” From one point of view, even when we prostrate or pray to a “statue” we are connecting, ultimately, to our own Buddha Nature. Both the statue, and ourselves, can be understood to be empty, making the topic of prayer in Buddhism a difficult concept.

When our prayers are loving and full of love and compassion, we are creating more love in the world. Thich Nhat Hanh teaches that it doesn’t matter if the person who is sick knows they are being sent healing prayers. “When love and compassion are present in us, and we send them outward, then that is truly prayer.” 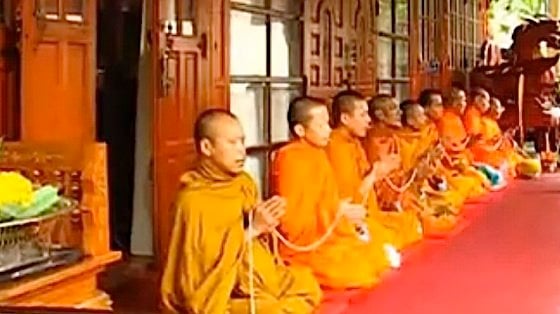 Monks chanting at a temple. Prayers such as the Seven Limb Prayer or countless others are recited daily by countless millions of Buddhists.

The foundation of prayer is to use an effective method of communicating between ourselves and the Buddha or Bodhisattva. When we meditate on our intention, Thich Nhat Hanh wrote in his popular book The Energy of Prayer, this “communication is realized straight away and we are linked.” This is because the Buddha is not separate from the self. 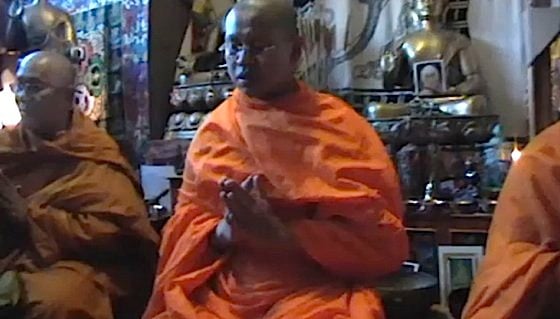 Buddha Weekly tackles the difficult question “Who do we pray to?” when we pray. In fact, are we praying at all? Sogyal Rinpoche said, “Buddhism denies the concept of God, but not the nature of God.” He goes on to explain that we all have Buddha Nature (video above.)

The empowerment of the prayer comes from compassion, concentration and mindfulness. Mindfulness is being in the present moment. If this is lacking, prayer is not possible. “If you are not present, who is praying?” writes Thich Nhat Hanh. With mindfulness comes concentration, which in turn is the path to parjna, or insight. 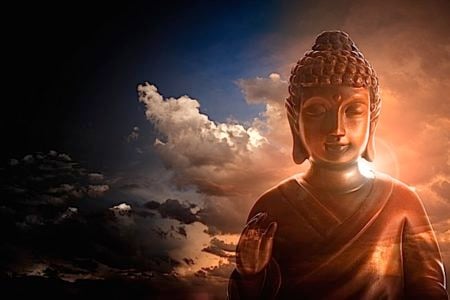 The Seven Limbed Prayer, contains within it, the entire essence of the complete Buddhist path in some traditions. Many Buddhists make it a practice to speak this enlightening prayer every day, morning and night. Simplified seven line prayers are often chanted throughout the day. In special practices, more elaborate seven-limbed prayers are often thought of. The practice is beautiful, enlightening, and ultimately, complete.

Each line (or stanza in the case of the more elaborate versions) speaks to the seven practices on the path:

I prostrate in faith with body, speech and mind

I make each and every offering, both actually performed and mentally transformed

I declare every non-virtuous act since beginningless time

I rejoice in the virtues of all Holy and ordinary beings

Please, Teacher, remain as our guide through Samsara

Please turn the wheel of Dharma for all sentient beings

I dedicate my own virtues and those of others to cultivate Enlightenment. 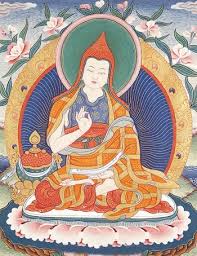 I take safe direction, till my purified state,
From the Buddhas, the Dharma, and the Highest Assembly.
By the positive force of my giving and so on,
May I actualize Buddhahood to help those who wander.

May the surface of the land in every direction
Be pure, without even a pebble,
As smooth as the palm of a child’s hand,
Naturally polished, as is a beryl gem.

May divine and human objects of offering,
Actually arrayed and those envisioned
As peerless clouds of Samantabhadra offerings,
Completely fill the sphere of space.

(1) I prostrate to all you Buddhas who have graced
the three times,
To the Dharma and to the Highest Assembly,
Bowing down with bodies as numerous
As all the atoms of the world.

(3) Throughout my beginningless samsaric existence,
In this and other lives,
I ‘ve unwittingly committed negative acts,
Or caused others to commit them, and further,
Oppressed by the confusion of naivety.
I ‘ve rejoiced in them – whatever I’ve done,
I see them as mistakes and openly declare them
To you, my Guardians, from the depths of my heart.

(4) With pleasure, I rejoice in the ocean of positive force
From your having developed bodhichitta aims
To bring every limited being joy
And in your deeds that have aided limited beings.

(5) With palms pressed together, I beseech
You Buddhas of all directions:
Please shine Dharma’s lamp for limited beings
Suffering and groping in darkness.

(6) With palms pressed together, I beseech
You Triumphant who would pass beyond sorrow:
I beg you, remain for countless eons
So as not to leave in their blindness these wandering beings.

(7) By whatever positive force I’ve built up
Through all of these that I’ve done like that,
May I remove every suffering
Of all limited beings.

By directing and offering to the Buddha-fields
This base, anointed with fragrant waters, strewn with flowers,
And decked with Mount Meru, four islands, a sun, and a moon,
May all those who wander be led to pure lands.
Om idam guru ratna mandala-kam nir-yatayami.
I send forth this mandala to you precious gurus.

Seven-Limb Prayers are often in sadhanas to devotional deities or meditational yidams and practiced daily by devout followers. An Example of a Prayer in Buddhism, the Seven-Limb Prayer (in English): 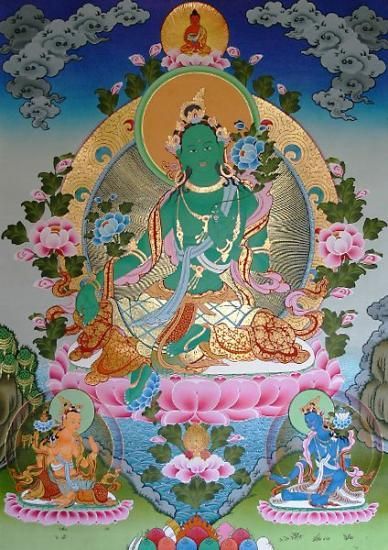 Reverently I prostrate to the venerable Arya Tara
And all the conquering Buddhas
And their sons who reside in the ten directions
Throughout the past, present and future.
Om Tare Tuttare Ture Svaha!

I offer flowers, incense and butter lamps,
Perfume, food, music and the like
Both those actually arranged here and those mentally
transformed;
Please accept them, assembly of Arya Taras.
Om Tare Tuttare Ture Svaha!

I declare all that I have done,
From beginningless time until now,
With my mind being under the sway of delusion:
The ten non-virtuous and the five heinous crimes
Om Tare Tuttare Ture Svaha!

I rejoice in whatever virtuous merit
Has been accumulated throughout the three times
By hearers, solitary realisers,
Bodhisattvas and ordinary beings.
Om Tare Tuttare Ture Svaha!

I request you to turn the wheel of Dharma –
The great, small and common vehicles
In accordance with the intentions of all sentient
beings,
And suited to their individual minds.
Om Tare Tuttare Ture Svaha!

I beseech you to remain until samsara ends
And not pass away to the state beyond sorrow
Please, with your boundless compassion, look
Upon all beings drowning in the ocean of suffering.
Om Tare Tuttare Ture Svaha!

May whatever merit I have accumulated
Be totally transformed into the cause of enlightenment
And may I become, without a long passage of time,
The glorious deliverer benefiting all migrating beings.
Om Tare Tuttare Ture Svaha! 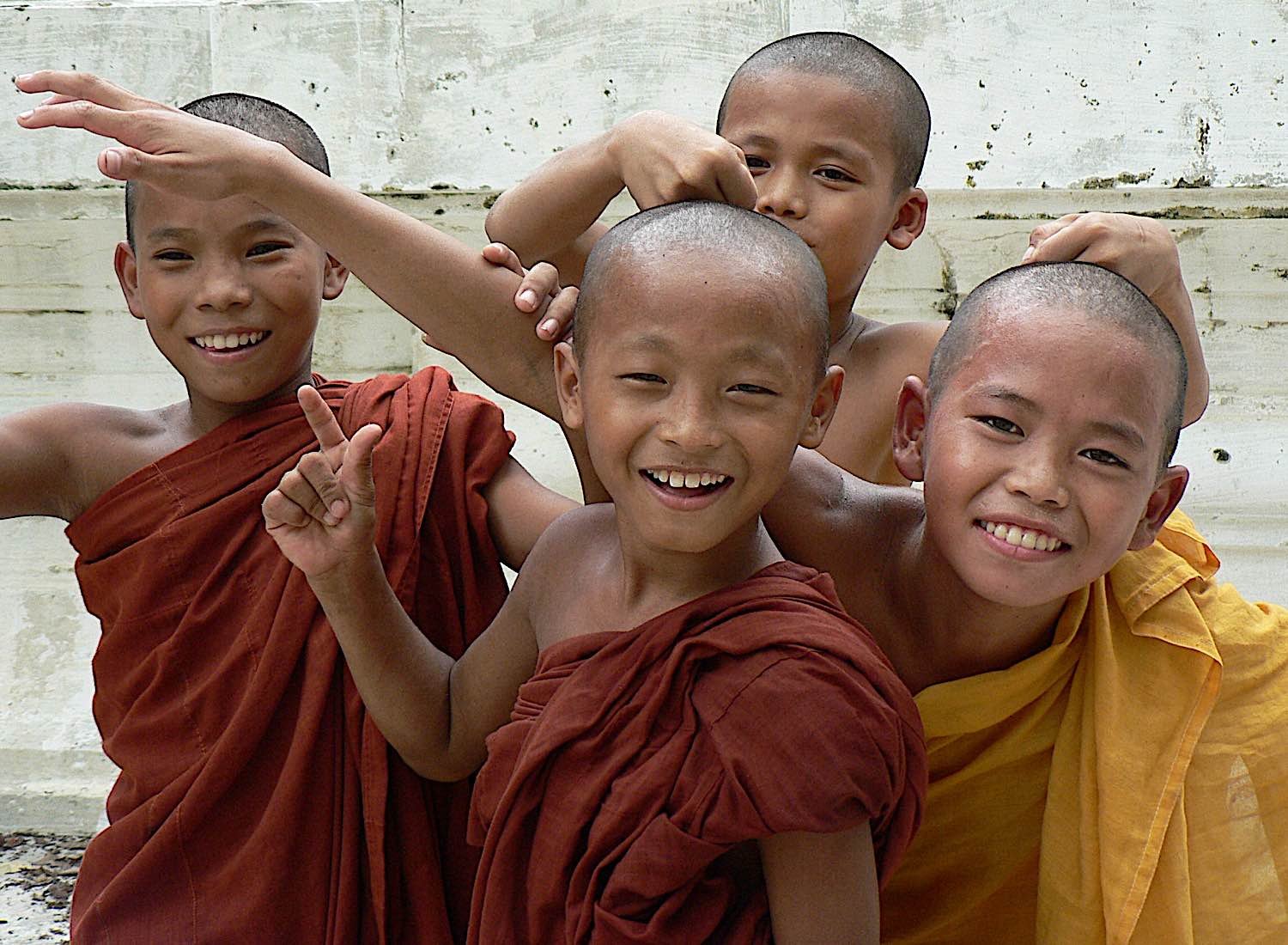 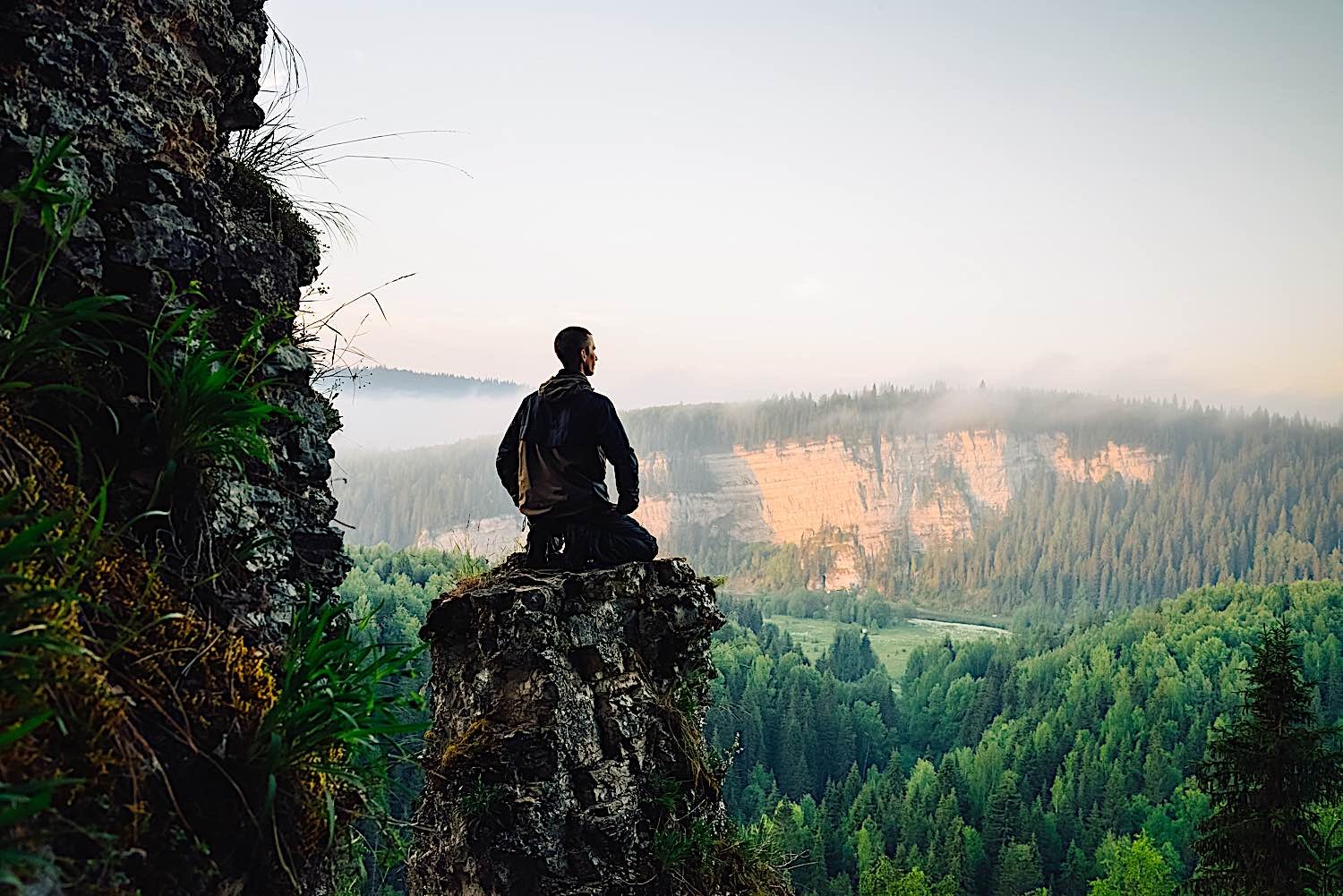 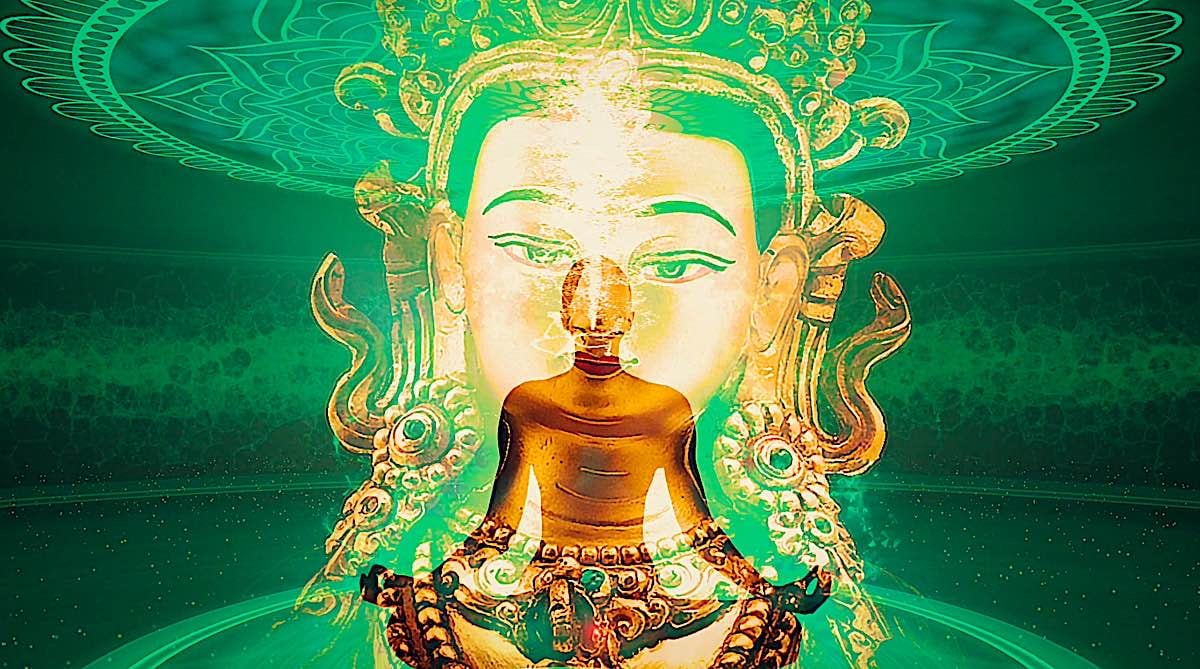 Video: Celebrating 40 Years of Dharma Practice in Remote Tasmania! One of the oldest Dharma centers in the West Commemorates with Retreat, and a Party

Mokugyo Fish Drum: The Zen of Drumming for a Wakeful Mind and Mindfulness with the Wooden Fish Drum’s Unique Sound

Finding the Good in Any Situation and “Turn the other cheek”? The Sutra with Advice to Venerable Punna from the Buddha

Benefits obtained from wealth for householders: Adiya Sutta — righteously obtained and righteously used, wealth is not negative karma as long as “I have done what will not lead to future distress”