One of the often-overlooked aspects of the story of Buddha’s Enlightenment under the Bodhi Tree is the dual significance of the “Bhumi Sparsha” — the Earth Witness Mudra.

By touching the Earth, to be a witness of His merits — when confronted by Mara on the eve of Enlightenment — he not only signified he was free of illusory attachments but at the same time re-affirmed that Dharma is intricately bound up with nature — entirely in tune with the Earth and Universe.

Often, we think of Buddhism as Wise, but “detached” and emotionless and dry — detached being something of the opposite of attachment — yet Buddha taught Compassion with a capital C, together with Wisdom with the capital W.

This is why the Bhumi Sparsha is more than just a symbol of Wisdom merit; it shows how intricately bound the Dharma is with all of nature. Not Nihilism, but Everything-ism. What did the Earth bear witness to? Countless meritorious acts of the Bodhisattva, giving himself to all beings in fearless Compassion. Not Wisdom alone.

This celebrated moment, the earth-witness mudra, is symbolic of Buddha’s Enlightenment, as explained by Karen Armstrong:

“It not only symbolizes Gotama’s rejection of Mara’s sterile machismo but makes a profound point that a Buddha does indeed belong to the world. The Dhamma is exacting, but it is not against nature. . . . The man or woman who seeks enlightenment is in tune with the fundamental structure of the universe.” [3]

Buddhism is ultimately a very nature-oriented path, in tune with the Earth. Earth may not be worshiped, as in many nature-oriented spiritual paths, but it is celebrated as One with all of us. Ultimately, in her role as a witness, Bhumi (Mother Earth) is not only the Witness for Buddha, but us as well; each, and every merit and negative merit we accumulate, from beginning-less time, in all our lifetimes, is witnessed by Bhumi. There is hardly a more intimate relationship possible.

The doctrine of Dependent Arising and interdependence indeed points to this “nature-oriented” concept. All phenomena, in a nutshell, is dependent on all other phenomena. This is central to the truth of Shunyata, of Emptiness. Once all the delusions are stripped away, Shunyata means that we are ultimately “empty” of individual being — but that we are wonderfully part of a whole, in Oneness with All. Interdependent Arising tells us that all beings depend on others, just as we depend on all the elements: earth, air, water, and energy (fire). It also informs us that without the perceiver, there is no perceived — a very sound Quantum Physics notion.

Buddha’s witness was the earth rather than heavens

Reinforcing this concept, unlike other great spiritual teachers and leaders — who mostly were inspired to revelations from angels and gods of heaven — Buddha’s sole witness was Bhumi — Mother Earth. How much more down-to-earth can you get? She saw him in all his lifetimes, every act, every merit, every compassionate deed.

Attesting to their closeness to nature, Buddha and his Bikkus spent most of their lives in the wilderness, homeless, living only on what the land and lay followers offered them. Earth was not only the witness; she was the supporter and nurturer. The early Sangha was, at heart, nature-loving seekers who found the Dharma, both Wisdom and Compassion, in the wild of Mother Earth. Not only was she witness to Buddha’s Enlightenment, but she was also celebrated within it.

In a treasured practice in Thailand, celebrants offer drops of water from glass to a vase, drop by drop — to symbolize sharing the merits with all living beings in all the 31 planes of existence. [1] This beautiful ceremony, honouring the Earth Mother — in Thailand, she is called Phra Mae Thorani — honours her “witness of the Buddha’s countless merits” — when Mara challenged Shakyamuni under the Bodhi Tree. In a beautiful legend, Phra Mae Thorani (Mother Earth) wrings out the “cool waters of detachment” out of her long hair — washing away in a torrent Mara, the demon who was tempting Buddha under the tree near the moment of His enlightenment. The story is a lovely one, whether you treat it as literal or symbolic:

“The Bodhisattva was sitting in meditation on his throne under the Bodhi Tree, Mara, the Evil One, was jealous and wanted to stop him from reaching enlightenment. Accompanied by his warriors, wild animals and his daughters, he tried to drive the Bodhisattva from his throne. All the gods were terrified and ran away, leaving the Bodhisattva alone to face Mara’s challenge. The Bodhisattva stretched down his right hand and touched the earth, summoning her to be his witness. The earth deity in the form of a beautiful woman rose up from underneath the throne and affirmed the Bodhisattva’s right to occupy the vajrisana. She twisted her long hair, and torrents of water collected there from the innumerable donative libations of the Buddha over the ages created a flood. The flood washed away Mara and his army, and the Bodhisattva was freed to reach enlightenment.” [2]

So countless were Buddha’s merits — accumulated over his endless incarnations as a Bodhisattva — that the flood of merit obliterated Mara, and his army. 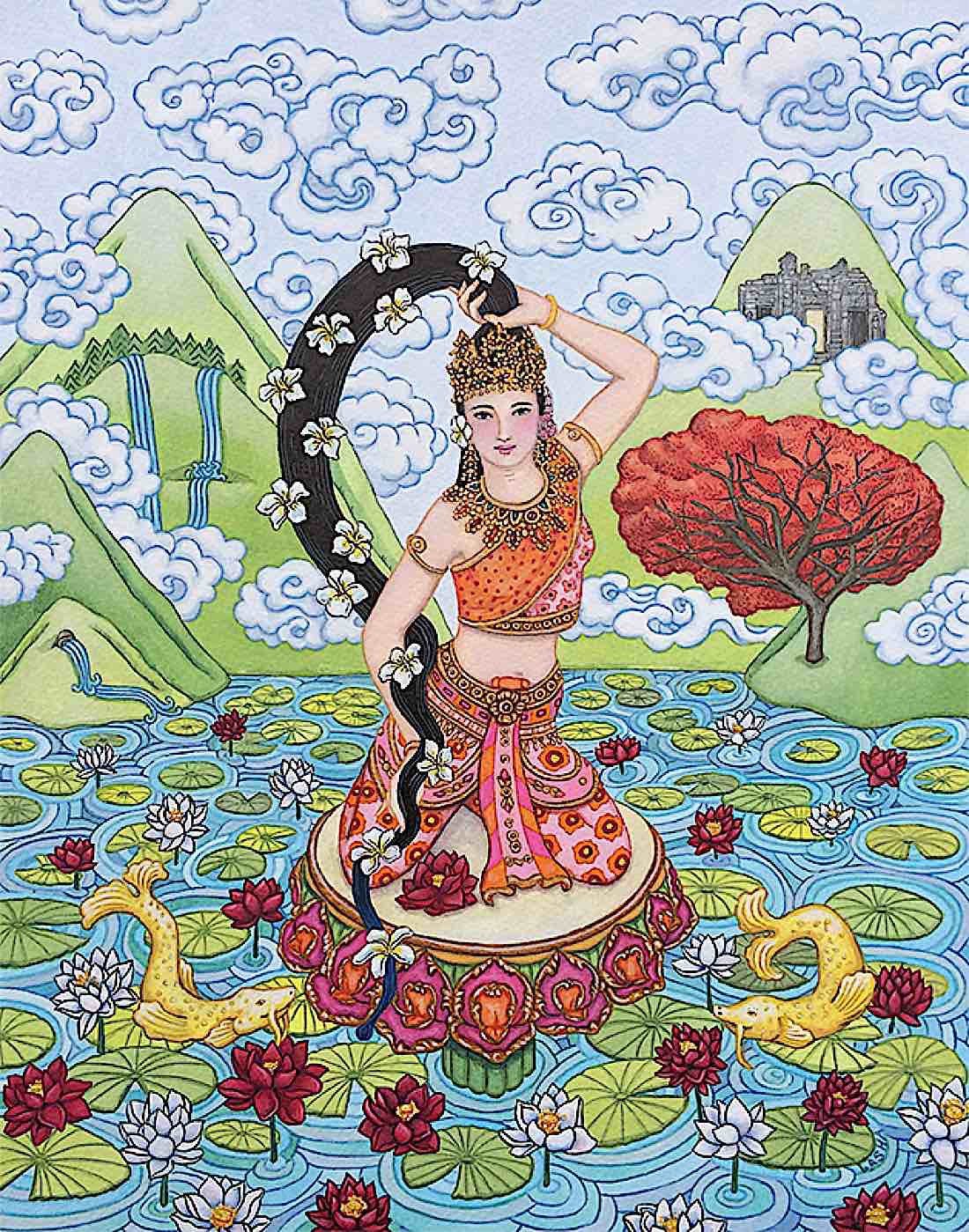 The Earth as Witness

In the most famous depictions of Lord Buddha, He sits in the Vajra position, with his hand touching the earth, a gesture known as the Bhumi-sparsha (“gesture of touching the earth) or, “Earth Witness Mudra” (the Maravijaya). (Bhumi is one of the names of Mother Earth.)

Throughout Buddhism’s long history, Mother Earth has held a place of honour, as the witness of the Buddha’s merits, deeds and ultimate Enlightenment — and as the support for every sentient being. 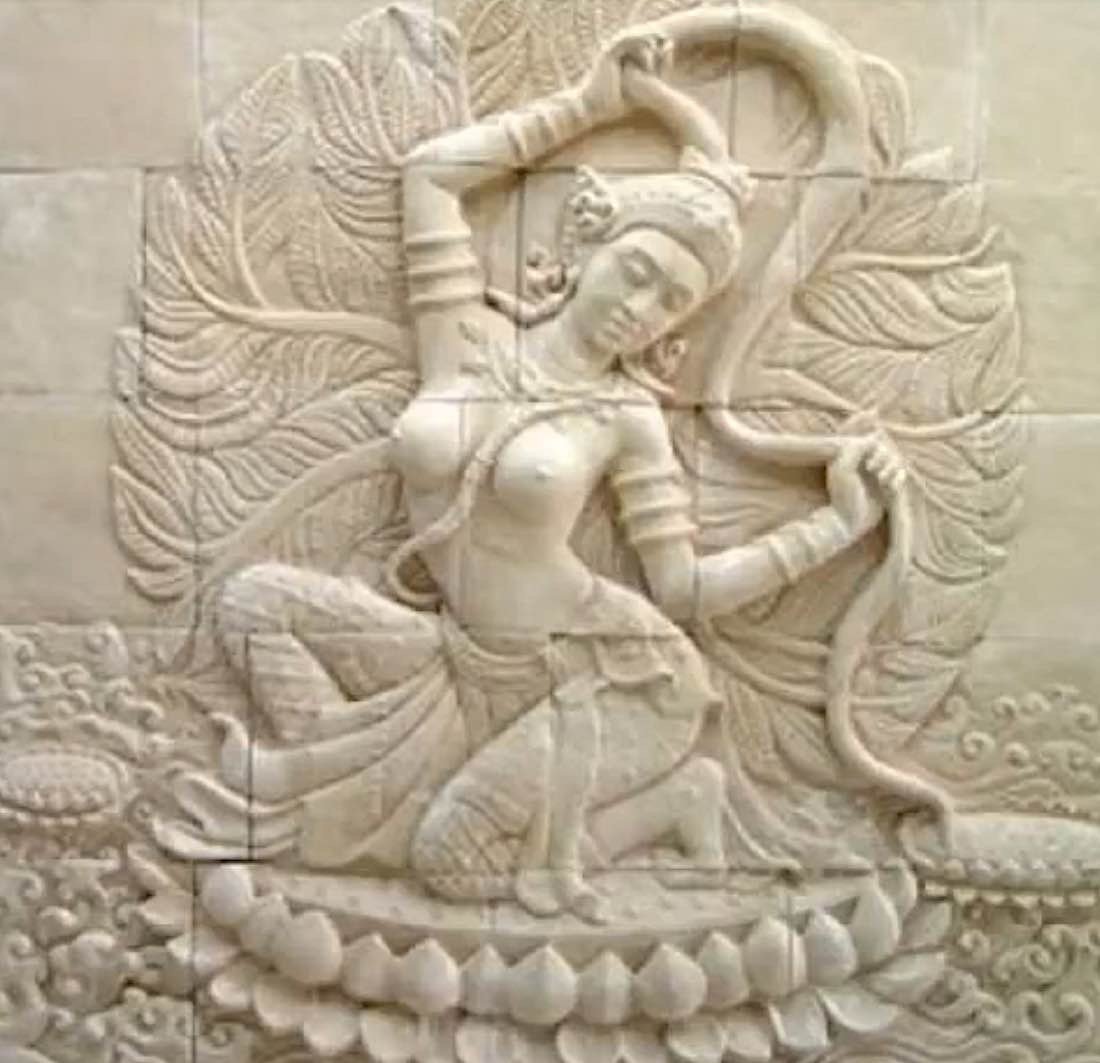 Even in Buddhism, Mother Earth’s many names are diverse. She is celebrated in a big way all over Southeast Asia as Phra Mae Thorani. In Pali, she is Vasudhara — whose name means “stream of gems” — an important deity in Nepal today. In India she was known as Prithvi (Prthvi), Ksiti, Bhumi, Dharani. In Burma, Wathondare. Her statues appear in many temples, often celebrated with water ceremonies, commemorating the “wringing of her hair” and the torrent of Buddha’s merits that swept away Mara. In Burma, they celebrate this by pouring water from a glass, drop by drop, to a vase, confessing faith with the hsu taung imaya dhammanu, as they proceed. She is even associated with Yellow or Golden Tara.

Her mantra, as Vasudhara, is

Today, with the earth struggling to breathe — with polar ice caps melting, with category five hurricanes, with run-away deforestation and industrialization — perhaps her mantra and her praise is more important than ever before. She is not only our witness; she is our home and mother.

[3] Cited from “The Buddhist Earth Witness Mudra” on Learn Religions

Celebrating Lunar New Year! Happy Year of the Tiger: roaring back for 2022. Wishing you every auspiciousness!