Tara’s vast popularity in Mahayana Buddhism — as both Bodhisattva and Buddha — is easy to understand. Not only is she a “Mother” — a mother deity and the “Mother of All Buddhas” — but she also protects us from the Eight Dangers or Fears, including diseases and epidemics.

How important is Tara? It was at Tara’s urging that the great Atisha left India to go to Tibet and brought the Dharma. It was Tara who challenged great Naropa with the question: “Do you understand the words or the sense?” The Mahsiddha Surya Gupta received teachings on the 21 Taras directly from Tara. The great Enlightened Padmasambhava himself brought Tara practice to Tibet. Countless Mahasiddhis and Yogis in India, Tibet and Nepal relied on Tara.

In other words, her practice is much more than mundane protection from dangers in our daily lives. (Although, to see Tara in action overcoming “attackers” see the beautiful painting below of the monk rescued by Tara from his attackers.)

The Sutra of Tara Who Protects from the Eight Fears is important as a Sutra — Tara’s own beautiful, hopeful, evocative and powerful words.

As explained by Martin Wilson in his wonderful book In Praise of Tara:

“Tara’s beautiful sermon concisely presents this basic situation and outlines the levels of Dharma practice that lead out of it. Having made plain the futility of merely reciting mantras while one neglects to follow impeccably the conduct that must go with them, She delivers a Dharani that will help one’s practice if one uses it right.” [1]

The Great Dharani of the Sutra of Tara

This Dharani is widely used in Buddhist practice:

There are also countless Tantras dedicated to Tara. This sutra is actually found in the Kangyur (which means, “Translation of the Word”) and is incredibly important to Tibetan Buddhists and Buddhists in Nepal and India.

In this feature, we include the full English-Translated The Sutra of Tara Who Protects from the Eight Fears. Sutra recitation is a pre-eminent practice in Mahayana Buddhism. What better way to bring Tara’s protective Enlightened energy into your life than to recite her short sutra daily? Or, for those in a rush, the Great Dharani of the Tara Sutra (above.)

The Sutra of Tara — the root of Her popularity 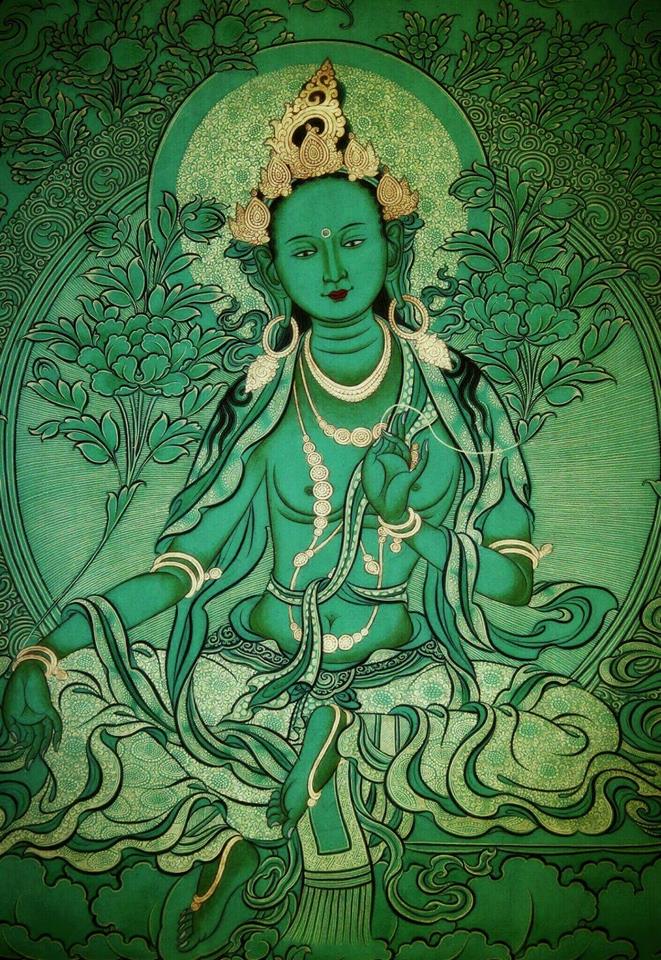 Hers is the first practice and mantra of the day. It’s easy to understand why. As we start a new day in danger-filled Samsara, what is more important than protection from our many fears? Think of it as breakfast with Mom. Nourished with the Dharma, and reassured that the Mother Buddha is on our side, we can get through our hectic day. The other reason Her practice comes first is we honour her by not eating meat. Since most of us cannot be full-time vegetarians, we “cheat” by remaining meat-free until after we meditate with Mother Tara. It’s the least we can do karmically. (And, for those who can stay meat-free, Tara smiles.)

Why fears are so important in Buddhism

Dangers and fears we understand instinctively in our mundane lives — but they are also the causes of our obstacles in our Mahayana Bodhisattva aspiration of Enlightenment for the benefit of all sentient beings. If we can overcome these fears and dangers, we can potentially achieve the goal of realizations.

The Eight Fears are the causes of our suffering — and they are also what prevents our realizations. At some level all Buddhist practices — from renunciation through to Lamrim practices and on to Highest Yoga Tantra — all rely on removing our fears and obstacles.

This makes Tara so vital. All Bodhisattvas are compassionate. Tara Herself sprang symbolically from the tears of the World Lord Avalokiteshvara, the Compassionate Bodhisattva. She vowed to help him in his mission to free all suffering sentient beings from Samsara. She is, in fact, an emanation of the Great Lord Chenrezig. She is, as suggested by her green colour, the Activity of all the Buddha’s compassion. What is Her activity? Saving us from the Eight Dangers, the Eight Fears — which are to be understood on two levels: mundane fears and dangers, and the ultimate spiritual fears and dangers.

The Eight Fears, including Epidemic Diseases

In the Sutra, verse 26, the eight fears are listed:

“Protector from the eight dangers – Lions, elephants and fire,Serpents, robbers, water, plagues and demons [pisacas] – homage to You!”

These fears can certainly be taken as literal since protection is vital to our lives — and therefore our practice and our Mahayana mission — but they have a second layer of meanings. Lions can generally mean a wild animal. But it also means “pride.” Our own pride is the cause of many of our obstacles, the root of our ego issues. In commentaries, the eight fears conquered by Tara are aligned with our internal obstacles:

The translator of the Sutra, Martin Wilson comments:

“The function of Tara from which the Sutra takes its title is mentioned only in verse 26…  The only difference from what is now a standard list is ‘plagues’ or epidemic diseases instead of prison.”

In the sutra Arya-Tara Who Saves from the Eight Fears we hear Her own magnificent words. The sutra records her teachings to a Divine Assembly.

THE SUTRA OF ARYA-TARA WHO SAVES FROM THE EIGHT FEARS

Thus have I heard at one time. The lord was residing in the realm of the gods on Mount Meru. Among the assembly there, the Goddess Tara spoke, as follows.

OM! Bodhisattva-mahasattva, Goddess! Please will you protect me!

Any son or daughter of good family should write this teaching, read it, recite it, preserve it, practice right attention upon it, and extensively teach it to others.

Thus spoke [the Lord], and the whole assembly, enraptured, exalted [His word]. This completes the Sutra of Arya –Tara Who Saves from the Eight Fears.

[1] The Sutra of Arya-Tara found in Tibetan translation in the Tantra section of the Kangyur and is classified as a Kriya Tantra. The Sutra of Arya-Tara Who Saves From the Eight Fears, translated by Martin Willson, in In Praise of Tara: Songs to the Saviouress, published by Wisdom Publications, 1986, page 87-91

[2] Pishachas are flesh-eating demons in Hindu theology. Such theology describes them as the sons of either Krodha or as Dakṣa’s daughter Piśāca. They have been described to bulging veins and protruding, red eyes. They are believed to have their own languages, known as Paiśāci.

Great Minds Evolve Alike: the ancient wisdom of Buddha, Socrates and the Bible as a window into the evolution of society and the self

Mani Wheel of Dharma: Why spinning prayer wheels may be the ideal Buddhist practice for busy people; benefits to self and sentient beings