How important is Saga Dawa Duchen?

“Saka Dawa Duchen is one of the four great holy days of the Tibetan calendar, each of which celebrates an anniversary of Shakyamuni Buddha’s display of extraordinary powerful deeds for sentient beings’ sake. On these four days, karmic results are multiplied by 100 million, as taught in the Vinaya text Treasure of Quotations and Logic.”

Most Important Day of the Year!

The most important month in the Tibetan lunar calendar is Saga Dawa, the 4th lunar month which runs from May 31st to June 29, with the biggest celebration on the full moon, June 14, 2022. (Full moon is also a day for taking Precepts and Medicine Buddha and Green Tara pujas)

The 15th day of this lunar month, the full moon day is called Saga Dawa Düchen (Düchen means “great occasion”) — the most important day in the Buddhist calendar, this year on June 14, 2022 (on the western solar-based calendar).

Saga Dawa Düchen commemorates the Birth, Enlightenment, and Paranirvana of our Perfect and most Supreme teacher, Buddha Shakyamuni. In other Buddhist traditions, this occasion is known as Buddha Purnima, or Buddha Day — and may be celebrated slightly earlier than Saga Dawa depending on the tradition.

From FPMT site: “Falling on June 14, 2022 for us this year, it is a day when karmic results are multiplied by 300 million times as it commemorates Shakyamuni Buddha’s three major life events.”

Taking the 8 Precepts for a day

Lama Zopa recommends taking the full 8 precepts — the precepts of a monk or nun — for the day. Traditionally, lay disciples follow five of the precepts — but for the day they take all eight. This should be done in the early morning (earlier the better!) He explains:

“Taking the eight Mahayana precepts is a way to make life meaningful, to take its essence all day and night, by taking vows,” Lama Zopa Rinpoche has taught. “It is so simple. It is just for one day. Just for one day. It makes it so easy.”

Here is a video of Lama Zopa offering the vows:

From the FPMT site: “To receive the lineage, it is necessary to repeat the words of the following prayers after Lama Zopa Rinpoche:

You can certainly take the precepts simply by action and conscious decision. You don’t have to take formal precepts. Just set your mind and, for the day, ensure you do your best:

Please be aware that by taking the lineage of the eight Mahayana precepts from Lama Zopa Rinpoche, Rinpoche will become one of your gurus.” You can download the PDF text for recitation along with Lama Zopa here>>

Saga Dawa (sometimes Saka Dawa) is the “Month of Merit” where, traditionally, all of our meritorious karma is particularly fruitful. It is an especially good month to practice the three grounds of merit:

According to the Universal Compassion Foundation:

“Saga Dawa is the month of merits, also called bumgyur Dawa, which means “merits multiplied by a hundred thousand times.” Tibetan Buddhists worldwide make extra efforts in practicing Dharma, generosity, and compassion to accumulate greater virtuous merits and purify our negative karmas. Along with remembering Buddha and his activities, the festival’s main point is to pray.” 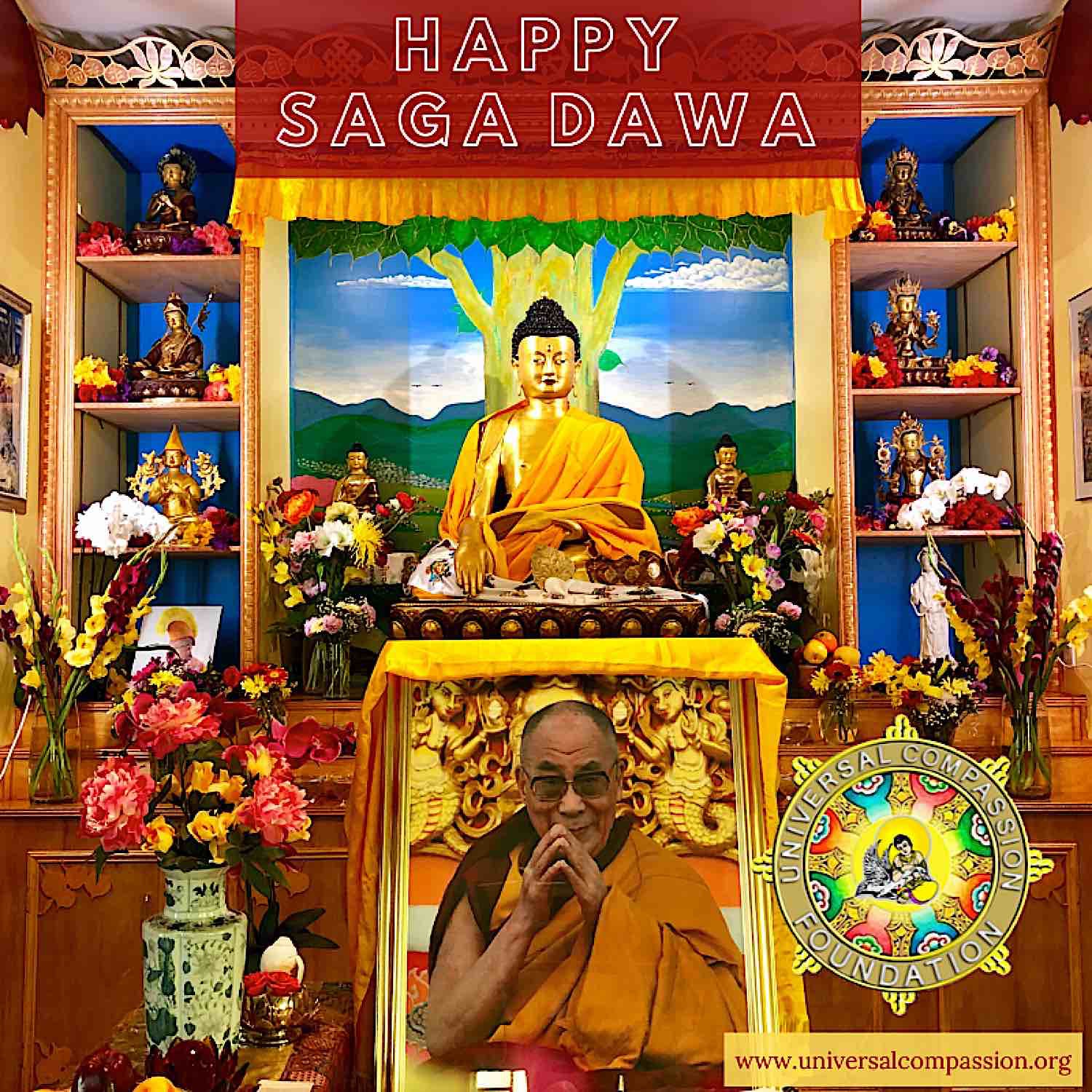 The most important day in the month (perhaps for the entire year, for many Buddhists) is Saga Dawa Duchen on the full moon. Duchen means “great occasion,” and this year falls on the full moon day, June 14. It is similar to Vesak in Theravadin Buddhism  — celebrating the birth, Enlightenment and Paranirvana of Shakyamuni Buddha, but is based on the Tibetan lunar calendar. Both are the “4th month” of the lunar calendars, but they are calculated differently. (See this feature on lunar confusion for clarification>>)

The day of the “Great Occasion” this year on June 14 is the best day of the entire year for “making merit” for the benefit of all sentient beings. In addition to the 8 precepts, other activities recommended include:

Every meritorious act in the Holy Month is especially fruitful. Positive acts can help us “scrub the negative karma.” Traditionally, positive karma is multiplied in the month, and especially on Saga Dawa Duchen. To many practitioners, this means extra practice (Bhavana or meditation), and it is also the month to be extra careful of Sila (morality). Many Buddhists become vegetarians in the Holy Month — at the very least on the day of Saga Dawa Duchen June 14).

Here are the ways to “make merit” in the meritorious month of Saga Dawa:

2 thoughts on “The month of merit: Saga Dawa, celebrating Buddha’s Birth, Enlightenment and Paranirvana — be generous, moral and practice often”