“Of what is the body made?” asked George Leonard in The Silent Pulse. “It is made of emptiness and rhythm.” He went on to describe how science views matter: “We can see the fully crystalline structures of muscle fiber, waving like wheat in the wind, pulsing many trillions of times a second. As we move closer to the nucleus, it begins to dissolve. It too is nothing more than an oscillating field that upon our approach dissolves into pure rhythm.”

Religious traditions around the world acknowledge the power of sound, whether it be prayer, mantra, the word of Saraswati or the Biblical God, “In the beginning was the Word.” Just as vibrations are theorized by some scientists to be the underlying “structure” of the matter, it seems religions all around the world understood this aeons ago.

Mantra practice is often no more than an act of dedication. But at a practical level, mantra goes beyond devotion, and can be used in spiritual growth, healing, even worldly affairs. 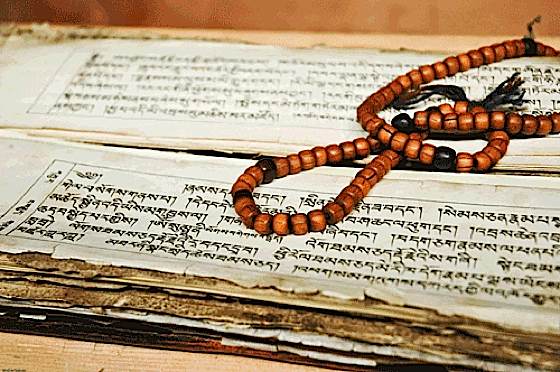 Mantra is not solely a Buddhist or Hindu practice. Most religions have similar practices. Sufi master Vilayat Inayat Khan said, “The practice of mantra actually neads the body with sound. The delicate cells of the elaborate bundles of nerves are subjected to a constant hammering, a seizure of flesh by the vibrations of divine sound.”

One of the most popular Buddhist mantras brings the healing energy of Medicine Buddha, here sung beautifully by Yoko Dharma. This mantra is open to anyone who wishes to bring His energy: Om Bekhandze Bekhandze Maha Bekhandze Bekhandze Randza Sumundgate Soha:

What can mantra do?

According to Thomas Ashely-Farrand in his book Healing Mantras: Using Sound affirmations for Personal Power Creativity and Healing, “Mantra can help you feel more peaceful or more energized. It can help you cope with illness and it can sometimes help effect physical healing. It an help you bring your wishes to fruition and create reality from your dreams. Mantra is a dynamic, individual, nonviolent way to approach conditions you wish to change.”

How does mantra work?

Mantra is effective. Mantra practice “works.” The question is “how does mantra work?” There are many ways mantra works, according to various experts:
• the effect of sound vibrations on matter, made predictable by centuries of spiritual experimentation
• the inherent spiritual meaning of the mantra that conditions the mind
• mantras connect us to the compassion of a Buddha or enlightened being
• mantras connect us to our Buddha within
• mantas induce mindfulness
• mantras have inherent power (the supernatural meaning) — not entirely to be discounted easily, based on plenty of anecdotal evidence
• centuries or thousands of years of practice and millions of practicers have created “collective consciousness” equity (a far fetched theory that never-the-less has been demonstrated in Rupert Sheldrake’s theories and several credible studies on remote learning)
• mantras induce an altered state of mind, helpful for healing and stress reduction.
• and a long list of more esoteric reasons.

In short, after thousands of years of practice, and a heavy weight of anecdotal evidence, mantras work at one level or the other. And, for those of use who are practicing mantra out of simple devotion, none of this matters. Tradition, heritage and a “feeling of rightness” and dedication to the sacred just makes it part of practice.

Below: Play the Om Mani Padme Hum mantra chanted beautifully by Yoko Dharma. This mantra is open for anyone who wishes to bring compassion into their lives:

Arguably, Om Mani Padme Hum (Om Mani Peme Hung in Tibetan), the mantra of Avalokiteshvara (Guan Yin in Chinese Buddhism), is the best known Buddhist mantra. Around the world, millions chant this precious mantra, seeking to connect with the Bodhisattva of compassion. Does the mantra mean anything? There is an English translation, but the meaning is not immediately relevant. Mani means “jewel” and padme translates as “lotus,” so it can be translated as “Hail to the Jewel in the Lotus.” But the true power of this jewel of mantras lies in its hidden meanings, upon which many sages have expounded. And the hidden cadence of “emptiness and rhythm.”

Chanting Om Mani Padme Hum can bring us closer to compassion and helps us find the Bodhisattva.

A video short teaching on Mantra “How to and Why to” from H.E. Zasep Tulku Rinpoche (8 minutes):

These practice principles are my own and teachers may ask you to practice differently. This is just what has worked for me:
1. Purpose of mantra recitation
Whether the mantra chanting is for devotion, spiritual progress, mindfulness meditation or to help with worldly issues (such as healing), it is a good practice to have a goal in mind at the beginning of a practice session.
2. Repetition of mantra
Many paths or teachers will specify the number of repetitions. This isn’t a formula necessarily, so much as a discipline. Generally, 108 is the minimum number of repetitions per practice session, although most practices call for much more than this. 108 repetitions corresponds to the 108 delusions that afflict life. There are six varieties of delusions: delusions of the eyes, ears, nose, tongue, body and mind. Each of these is multiplied by three — past, present, future — then by the two conditions of the heart, pure and impure, and the three sentiments (like, dislike, indifference.) When multiplied, this results in 108, long held by many religious traditions (Buddhist, Hindu, Catholic and others) to be significant.
3. Daily practice
Daily practice is the best approach to mantra, but often mantra can be accomplished faster in a full retreat. There will normally be a “formula” or number or repetitions, recommended by a teacher, your inner guide, or a tradition, but ultimately, more is better with mantra.
4. Place of practice
Mantra is about sound vibrations, which transcend place, but it is often helpful to practice in quiet, meditative environments, such as before your shrine, in a temple, or out doors in nature. Ultimately, though, mantra can calm the mind in any scenario. Often, people in distress chant mantras to great effect in the midst of storms, wars or disasters. A quiet space is not a requirement, only a help.
5. Chant with sincerity
Mumbling through a mantra is not a practice. It’s mumbling. Remain mindful of the mantra, and practice meditation techniques (such as detached watching, mindfulness, etc). But put your full mindful commitment to the practice. It’s not a ritual, it’s a practice that can change your life.

Amitabha’s mantra is open for all (here chanted by Yoko Dharma.) Amitabha is the Buddha of Infinite Light:

To Mala or not to Mala

Mala’s are an aid to counting at a very basic level. Also known as rosary, worry beads, or prayer beads, malas are not simply a “counter.” Most traditions consider malas to be a Dharma object, therefore due the respect of an ancient spiritual tool that has been used for centuries. Malas can be made of anything, and value is irrelevant. You can make them yourself or buy them. But once you begin using a mala, if you do, treat them with great respect. Use of a mala can strongly reinforce mantra practice, but is not necessary. Part 4 in this series is all about malls.

You can begin working with the “seed syllable” purification mantra Om Ah Hum (Om A Hum.) Often Om Ah Hum precedes or concludes other mantras in a practice session, with 108 or more recitations of Om Ah Hum followed by the other mantras. There are different ways to think of Om Ah Hum, such as the traditional Body, Speech and Mind. Or as the primal vibrations—Om as primal source vibration, Ah as primal speech vibration (and also the female aspect) and Hum as the mind vibration.

Lama Thubten Yeshe teaches the purification mantra this way: Purification of Body —”Concentrate on the white OM in your brain. Recognize that this white OM is the pure energy of the divine body of the buddhas and bodhisattvas.”Purification of Speech — “Concentrate on the red AH at your throat chakra, like the sun at sunset. Recognize that this red AH is the pure speech of the buddhas and bodhisattvas.”Purification of Mind — ” Your heart is pure, cool and calm, opened by the radiant light of the moon and the HUM. Infinite blue light radiates from the HUM. All narrow thoughts disappear; all indecisive minds disappear; all obsessed minds disappear.” 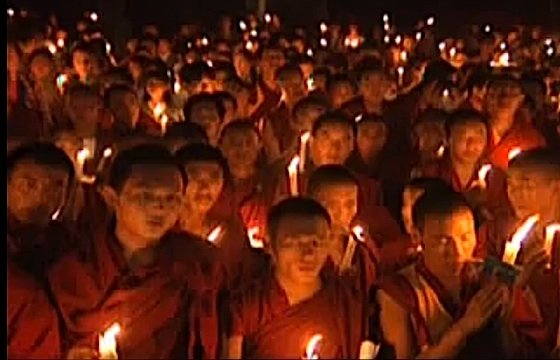 Power of dana and generosity “within our means” — the Sutta stories of Anathapindika, who gave Buddha Jetavana park

Padmasambhava Guru Rinpoche’s condensed “all teachings into one — which is concise and easy to practice”at the time of death: as requested by Lady Tsogyal

The Seven Great Parables of the Lotus Sutra; some of the most important teachings of Buddha for the Mahayana Buddhist path

1 thought on “Mantra Part 2: Good Vibrations — Mantras in Buddhist Practice “Of what is the body made? Of emptiness and rhythm.” How does mantra work?”