From our team at Buddha Weekly, we wish you Happiness, Good Fortune and Good Health in 2017.

Chinese New Year, following the Lunar calendar, typically falls a month or so (it varies) after solar Western New Year, and almost one month before Losar (Tibetan New Year — which this year is on February 24, 2017).

A Time to Purify?

Several traditions have become associated with Chinese New Year, most famously the “lucky packets” — little red envelopes filled with money. It is also a time to purify and try to encourage good luck in the New Year through positive resolutions, similar to Western New Year’s resolution.

In some Buddhist traditions, for weeks or days running up to New Year’s, it is considered beneficial to purify negative karmas lingering from the previous year. By doing so, we don’t carry the burden into the new year.

In Tibetan traditions, this might mean reciting hundreds or thousands of Vajrasattva mantas. Vajrasattva, the Buddha of Purity, who — if engaged with the four opponent powers — helps us purify all negative mental and physical karmic imprints.

Whether Buddhist or not, the four opponent powers are easily acknowledged as an “effective” method, from both a human — and a psychological — point of view, to remedy the harm caused by negative actions. The opponent powers, as described by Venerable Thubten Chodron, are:

More in this feature on Karma and Vajrasattva>> 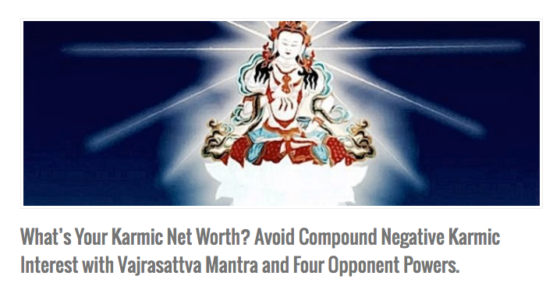 Youthful Manjushri: the flowering of wisdom; the gentle Buddha who cuts through ignorance with his flaming sword

Kucchivikara-vattha: The Monk with Dysentery (Sutra teachings) “If you don’t tend to one another, who then will tend to you?”