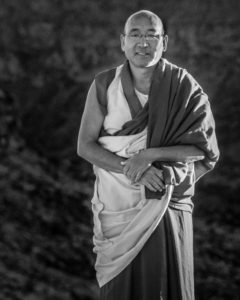 Lama Yeshe Ling Buddhist Study Group will host an intensive teaching and meditation weekend with the most Venerable Geshe Thubten Sherab in March, 2017.

On March 24th Geshe will give a public talk from 7pm to 9pm (by donation.) Then, on the weekend of March 25-26, both days from 10am to 5pm, Geshe will give explanations and teachings on Lama Tsongkhapa meditation and practice. Geshe will also lead a 2 day retreat on March 27-28 on the Stages of the Path to Enlightenment, both days 1pm-9pm.

Lama Tsongkhapa is a “Buddha of our times” in the Gelug Vajrayana tradition. As an enlightened being, Buddha Tsongkhapa has the same realizations as all of the Conquerors (Buddhas). His practice is very powerful, in part, because he was an emanation of Avalokitesvara (compassion), Manjushri (wisdom), and Vajrapani (power). [For more on Lama Tsongkhapa, see our full feature>>]

Tsongkhapa’s writings, particularly his The Great Treatise On The Stages Of The Path To Enlightenment, helped re-invigorate the practices of Vajrayana Buddhism, and has been read and studied by countless students.

The Stages of the Path to Enlightenment

Geshe Sherab agreed to stay two more days to lead a two-day retreat on The Stages of the Path to Enlightenment based on Lama Tsongkhapa’s teachings. 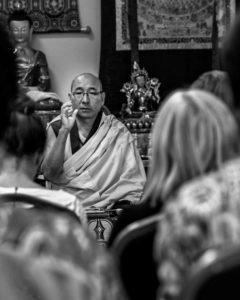 Geshe Sherab, born in 1967, entered Kopan monastery at a young age. At the age of eighteen he continued his education at Sera Je, where he received teachings from his root gurus such as Geshe Jampa Gyatso, Geshe Doga, Lama Yeshe, Lama Zopa Rinpoche, Lama Lhundrup, H.E. Kensur Rinpoche Losang Tsering and many others.

He went on to achieve his Geshe degree by 2000, the highest level of education available to Gelug monks, and the rough equivalent of a Ph.D. After completing his studies at the Gyume Tantric College, he moved to the United States to help out at FPMT’s International Office.  He also now teaches at Dharma centers in Taos and Santa Fe, New Mexico and travels to teach at other centers. For an official biography, on the website of Geshe Sherab, please visit>>

“Lama Yeshe Ling is delighted to welcome back Geshe Thubten Sherab who will be offering weekend teachings on the Lama Tsongkhapa meditation practice in March. We are very fortunate to have Geshe Sherab extend his stay to additionally lead two full days of intensive meditation practice on the Stages of the Path to Enlightenment.

Lama Tsongkhapa is the great 14th century scholar and adept was the founder of the most popular lineage of Tibetan Buddhism today, this also being the principle lineage of the Dalai Lama. He is regarded as writing some of the most practical, clear, and easily understandable commentaries on Buddhas teachings. This meditation method is a concise and complete practice – perfect for those who have little time to meditate. It incorporates briefly the traditional meditation Seven Branch preliminary practices which greatly enhance the effectiveness and result from meditation. This practice can effectively increases our compassion and wisdom while also healing unhealthy states of mind, purifying suffering karma, and creating the inner causes for happiness. It is very beneficial for all levels of meditation experience.

Venerable Geshe Sherab was born in Nepal of Tibetan parents, and received his education at Kopan Monastery, Nepal, the spiritual centre of the Foundation for the Preservation of the Mahayana Tradition (FPMT). He completed his studies at Sera Je Monastic University and at Gyume Tantric College in India. He has lived and taught in the west on and off for the past 15 years. He returned to Nepal after several years in the US to become Headmaster of Kopan Monastery.  Now a retired Headmaster, with more time to devote to meditation and to teaching, Geshe-la has been travelling and teaching at FPMT Centres in USA, Canada, Mexico, Asia, Australia and Europe. More information on Geshe Sherab.“

Lama Yeshe Ling was named after the great teacher Lama Yeshe, and is part of the Foundation for the Preservation of the Mahayana Tradition (FPMT), founded by Lama Yeshe and Lapa Zopa Rinpoche.

Buddha’s Advice for Politicians? 10 Virtues of a Leader; “I have done what will not lead to future distress”

Ashtamangala: the Meaning of the 8 auspicious symbols Of Buddhism

Body mandala practice in Vajrayana Tantric Buddhism — and riding the winds of the inner body “Where mind goes, the body follows”

Guan Shi Yin and the ten great protections of the Goddess of Mercy Kuanyin: Avalokiteshvara, Bodhisattva of Compassion