Did Buddha actually teach or suggest a Vegetarian lifestyle?

Does the First Precept of Buddhism prohibit killing of animals?

Does the First Precept of Buddhism prohibit killing of animals?

Not all Buddhists are vegetarians. Did the Buddha actually suggest a vegan lifestyle? Which sutras actually give instruction in vegetarianism? These are the questions that frame our special feature video focusing on Vegetarianism.

What are the five Buddhist Teachings from Sutra Recommending Vegetarianism. Both older Pali Sutta and Mahayana Sutra dedicate extensive space to teachings on compassion and vegetarianism.

The primary, and most obvious citation is the first Precept of the Buddha: Abstain from Taking Life. This isn’t ambiguous, since Buddha made it clear that all sentient life are equal. Buddha Dharma is all about removing suffering.

“The first precept, to abstain from killing, includes the “taking of life of any being with breath.”

When it becomes a debate is from the point-of-view of “intention.” Some Buddhists — who are, perhaps, not ready for a vegetarian lifestyle — might ask “If I didn’t instruct the butcher to kill the animal, is eating meat okay?”

This is because in Pali Sutta, Buddha instructed his monks to eat whatever the kind supporters gave to them. In Sutta he is quoted as saying: “Monks, I allow you fish and meat that are quite pure in three respects: if they are not seen, heard or suspected to have been killed on purpose for a monk. But, you should not knowingly make use of meat killed on purpose for you.” In this case, Buddha is teaching that monks should not reject alms — as it would be disrespectful to the giver.

Yet, it is clear, that Buddha recommended a Vegetarian or Vegan lifestyle, especially, where it is not possible to argue “I didn’t intend for an animal to be killed for me.”

Mahayana sutras, on the other hand, almost entirely reject meat and emphasize compassion to all sentient beings. In the Mahayana Mahaparnirvana Sutra, the final teachings of the Buddha, he insisted no follower should any kind of meat of fish.

The overwhelming reason for a prohibition on meat-eating, from a Mahayana view, is the strong teachings on Buddha Nature. In the Angulimaliya Sutra, Manjushri asks Buddha if Buddhas do not eat meat because of tathagata-garbha — or Buddha Nature, and the cycle of rebirth.

Mañjuśhrī, that is so. There are no beings who have not been one’s mother, who have not been one’s sister through generations of wandering in beginningless and endless saṃsāra. Even one who is a dog has been one’s father, for the world of living beings is like a dancer. Therefore, one’s own flesh and the flesh of another are a single flesh, so Buddhas do not eat meat.

Buddha also taught lay disciples to start by reducing meat consumption. For example, on Sacred or Holy Days, lay disciples become vegetarian for the day. They might choose one or two days a week to abstain. The key concept is to contribute to reducing suffering.

In other words, even becoming a vegetarian for a day a month or week is helpful in terms of minimizing the negative karma of killing.

Notable Teachers Who Are Vegetarian

Who are the notable Buddhist teachers known to teach and practice vegetarianism.

Famously, the great Yogi Shabkar was vegetarian. In his autobiography, Shabkar wrote:

“Above all, you must constantly train your mind to be loving, compassionate, and filled with Bodhichitta. You must give up eating meat, for it is very wrong to eat the flesh of our parent sentient beings.”

Thich Nhat Hanh, the famous Zen teacher, nominated for the Nobel Peace Prize by Martin Luther King, is not only a vegetarian — he’s an activist.

“No killing can be justified,” he said.

The Dalai Lama, numerous times, has asked his students and followers to adopt vegetarianism when possible. He himself prefers vegetarianism, but he occasionally eats meat when it is given to him and because of the advice of his doctors. In 2009, he said:

“The best thing is to give up meat entirely. Sometimes one’s lifestyle and circumstances provide no alternative but to eat meat, and in these cases one should eat as little meat as possible. Tibetan monasteries and nunneries in south India became entirely vegetarian 15 years ago. Festivals and ceremonies in all Tibetan monasteries and nunneries should be completely vegetarian.”

The 17th Karmapa, Urgyen Trinley Dorje, very strongly urged his students to adopt vegetariansim. On January 3, 2007, he said, ” There are many great masters and very great realized beings in India and there have been many great realized beings in Tibet also, but they are not saying, “I’m realized, therefore I can do anything; I can eat meat and drink alcohol.” It’s nothing like that. It should not be like that.”

Drikung Shakpa Rinpoche said, “My students, whomever are eating or using meat and calling it tsokhor or tsok, then these people are completely deserting me and going against the dharma.”

Lama Zopa Rinpoche said, “As there are more and more people becoming vegetarian, that means less and less animals will be killed. So it is very important. In the world, people eat meat mainly because of habit. So, many people have not thought that the animals experience unbelievable suffering.” 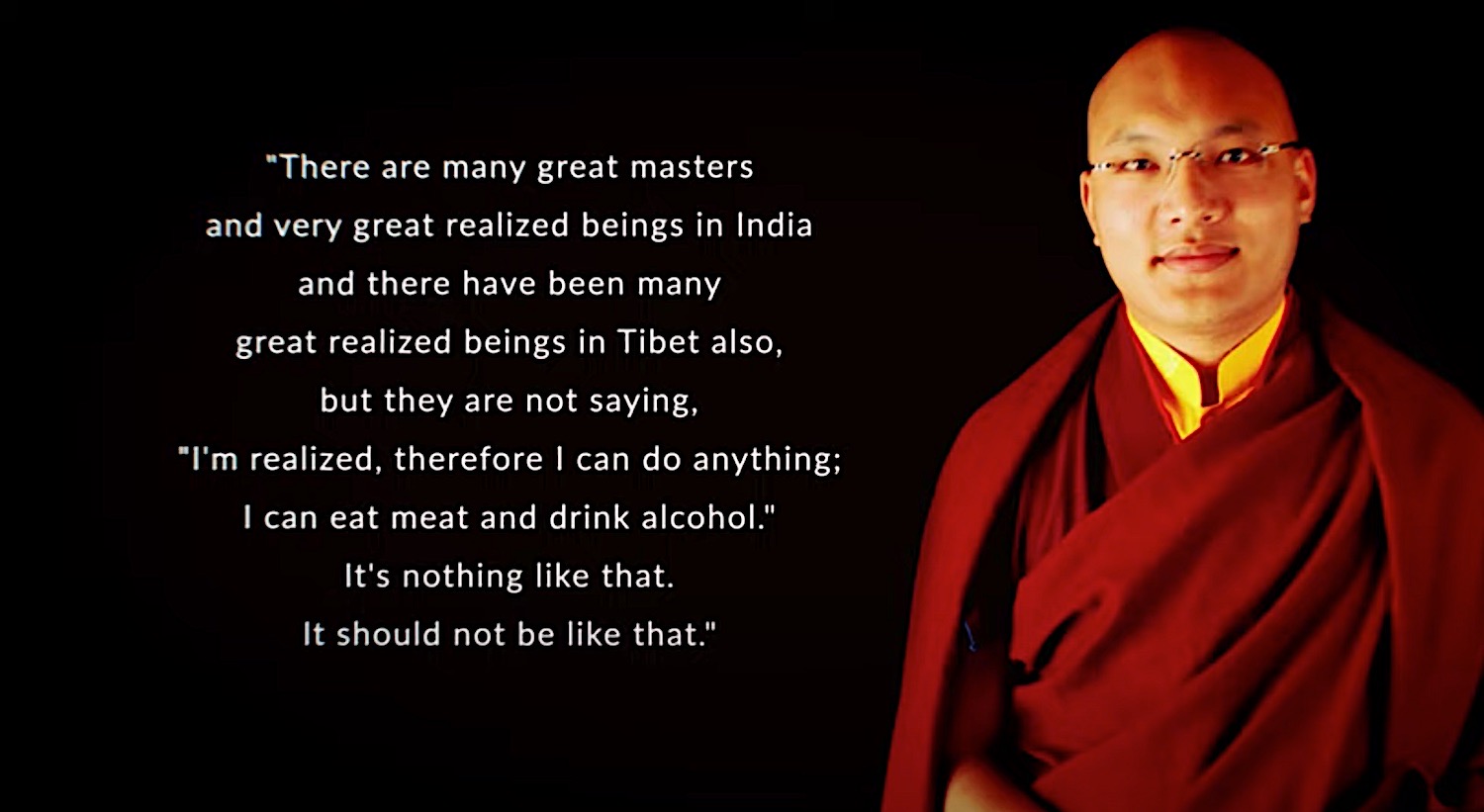 The 17the Karmapa Urgyen Trinley Dorje, very strongly urged his students to adopt vegetariansim. On January 3, 2007, he said, ” There are many great masters and very great realized beings in India and there have been many great realized beings in Tibet also, but they are not saying, “I’m realized, therefore I can do anything; I can eat meat and drink alcohol.” It’s nothing like that. It should not be like that.”

The caution, of course, is to never take anything to extremes. Buddha particularly taught “the middle way.

Buddha taught the importance of the Middle Path. In this discourse, the third key concept is this Middle Way.

At that time, Siddhartha noticed a boat floating along the river, and overheard a music teacher telling his student how to tune instruments. He explained that you cannot tighten the string too much, otherwise it will break, but you cannot leave it too loose, otherwise the instrument will not make sound.

In a flash of insight, Siddhartha realized that it is necessary to move in the Middle way — not too tight, not too loose — equally moving away from luxury and extreme asceticism.

For us, too, the caution should always be one of moderation, not extremes that create further suffering. As we attempt to follow the path — the Eightfold Path — we always try to retain our perfectly tuned practice. 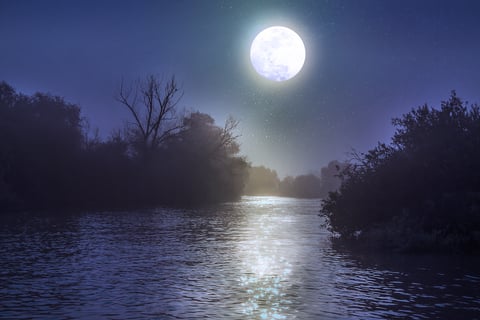 The forgotten nuns of Zanskar: 9 Buddhist nunneries in “one of the coldest inhabited places” have limited electricity, water and healthcare

Sutras: 10 Helpful ways to enjoy and learn more from reading Buddhist Sutras; tips for creating your own Sutra-Sutta reading club

Can Buddhism actually help you become a successful professional? The Eightfold path and core meditation techniques may actually be good for business.