Several Sutras cite Stupa building (Chorten in Tibetan) “while thinking of the Victorious One” as a “cause for Enlightenment.” The Analyzing Activity Sutra actually says, “Whoever builds the Stupa of the Tathagata will gain the eighteen benefits” (Je Nampa Djepe Do) — in future lifetimes. [See the list below from Sutra.] [Symbolism of Chortens or Stupas below with diagrams.]

Traditionally, any place where a Stupa is built becomes a powerful place of healing and merit. Stupas also symbolize “Buddha’s Holy Mind.” 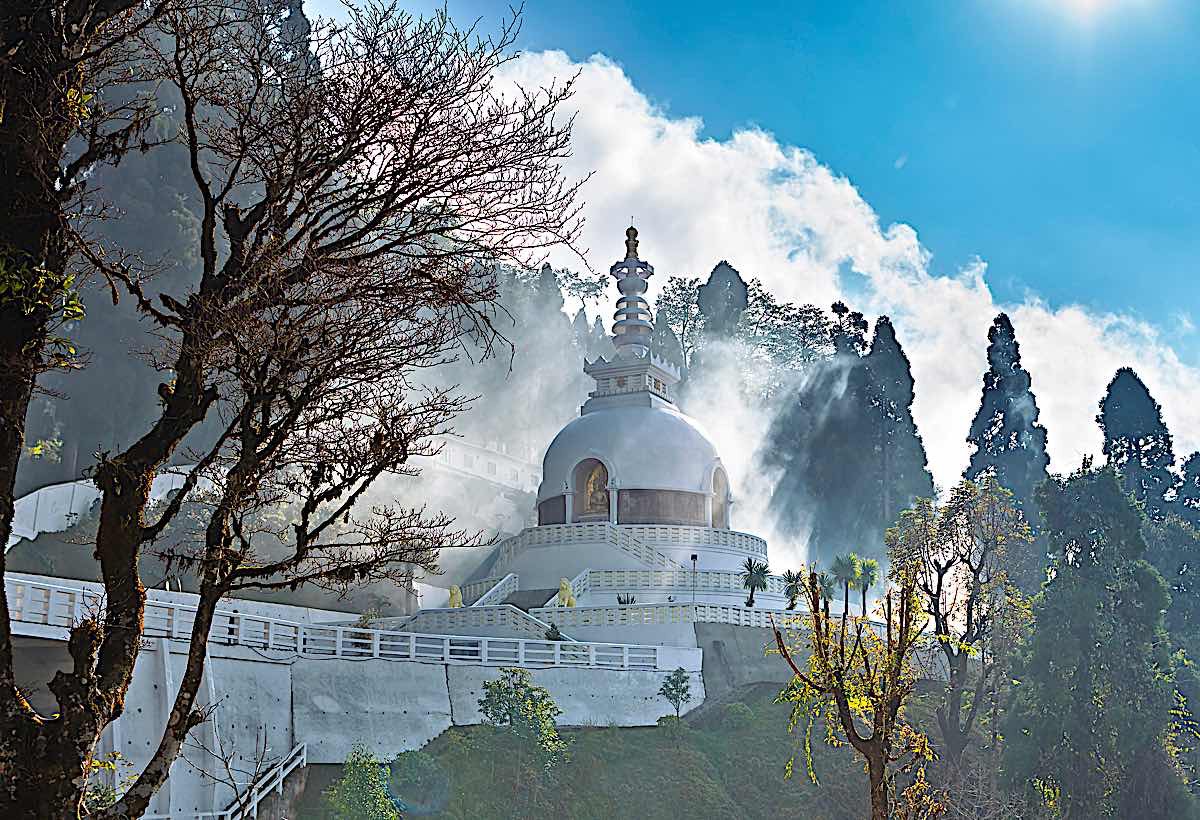 The Japanese-style Peace Pagoda (or Stupa) built in Darjeeling India.

“Whoever circumambulates or make offerings to a Stupa will be blessed by Tathagatas, move to the supreme enlightened state through a non-returning path, and purify all of their karmic obscurations.” 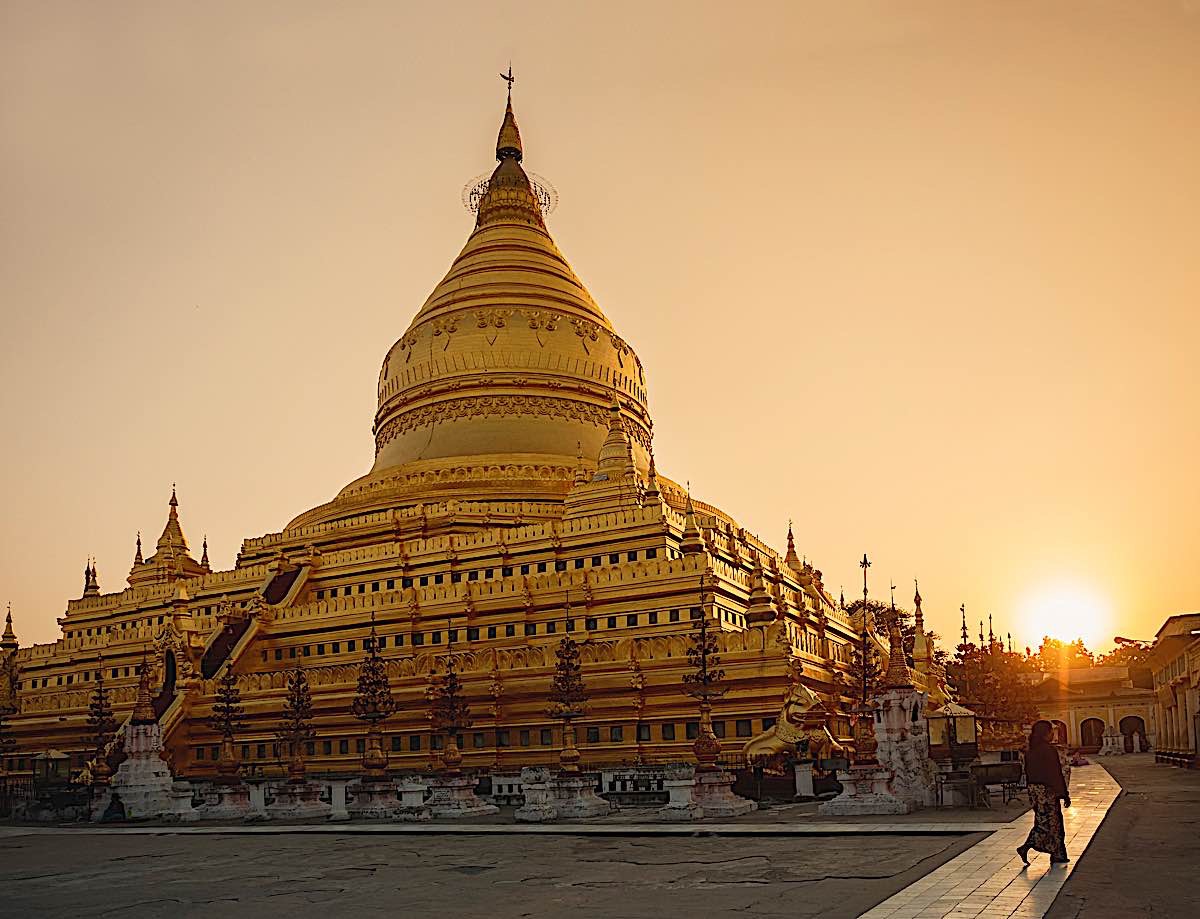 A magnificent Stupa in Myamar.

Nor is that all. The Stupa blesses the four elements it contacts, especially earth and air. The Noble Stainless Beams of Light Sutra says:

“Even if the shadow of a Stupa touches birds, animals, deer, or whomever, they will not be reborn in the lower realms.” 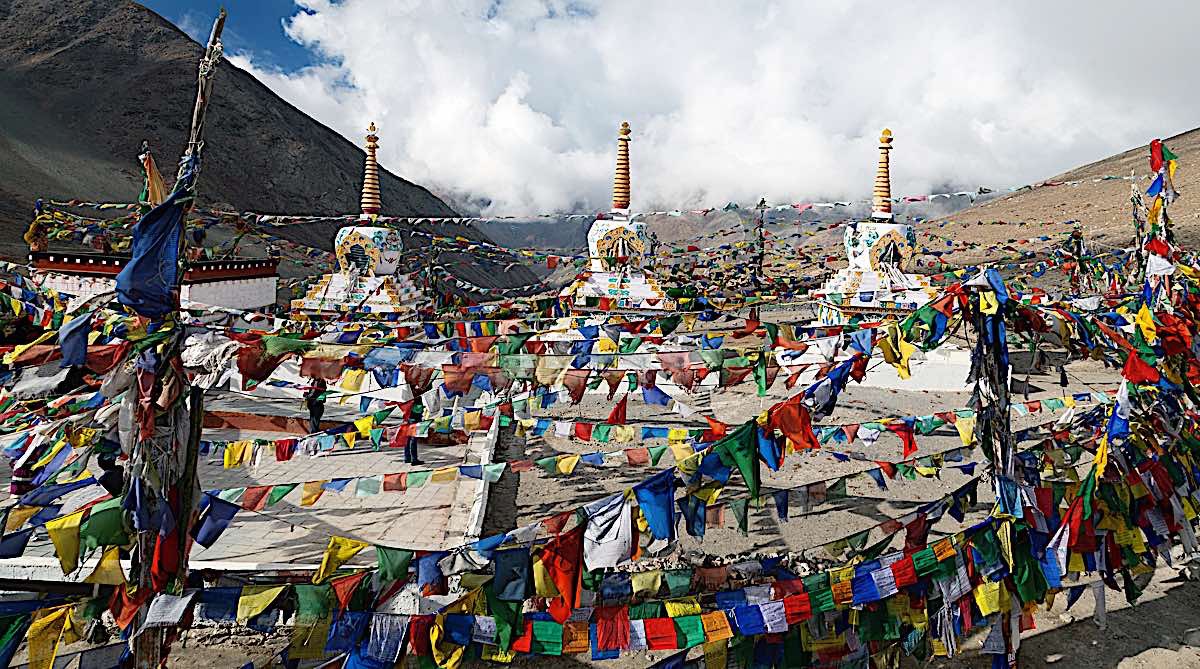 Building, funding or volunteering to build a Stupa, while thinking of the Buddha, “they will all reach Enlightenment.” [Lotus Sutra]

Even touching a Stupa has benefits

The Manjushrimitra Root Tantra says that merely “touching” a stupa has immeasurable benefits:

“Whoever contacts such a Stupa will develop great wisdom and long life, and even if they die, they will be reborn in the higher realms in a royal clan, and they will never go to the lower realms.” 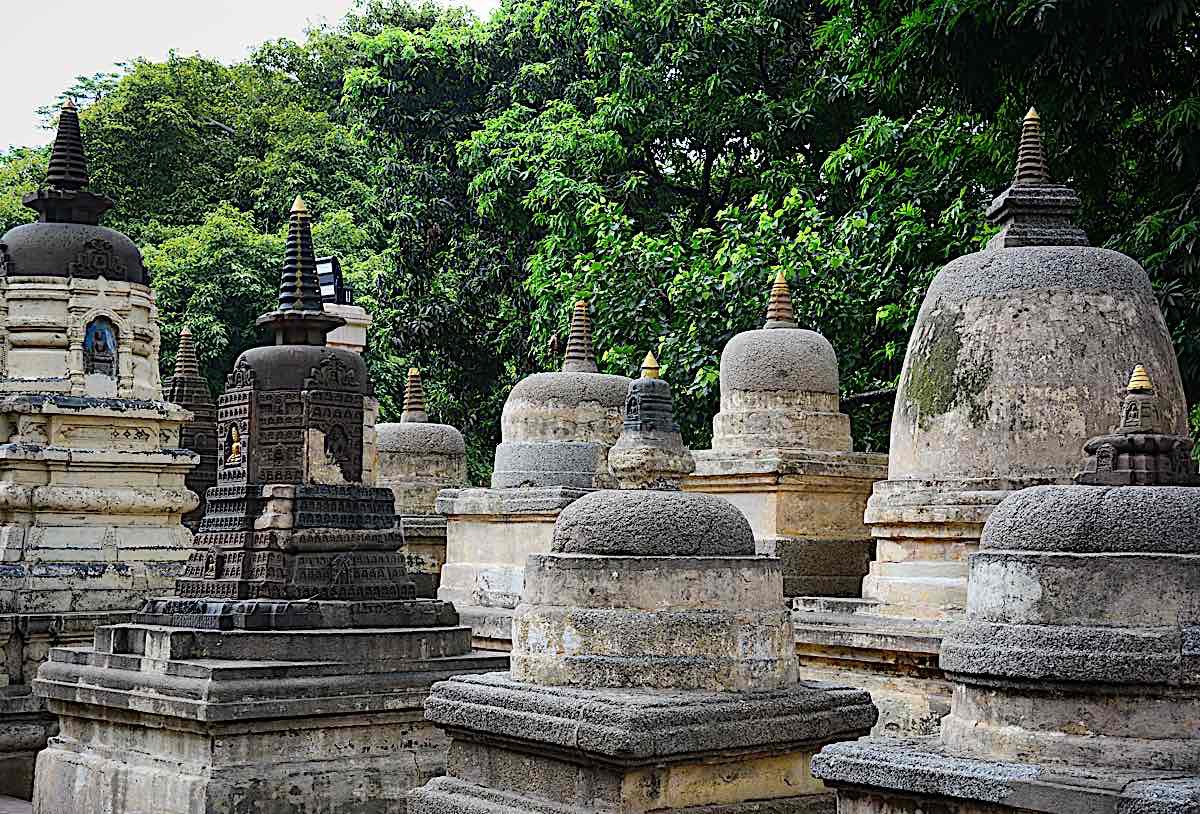 “A stupa is a palace where all the buddhas are abiding. Those beings who don’t have the karma actually to see buddha need the holy objects of body, speech and mind – statues, scriptures, stupas – as a field for accumulating merit.” 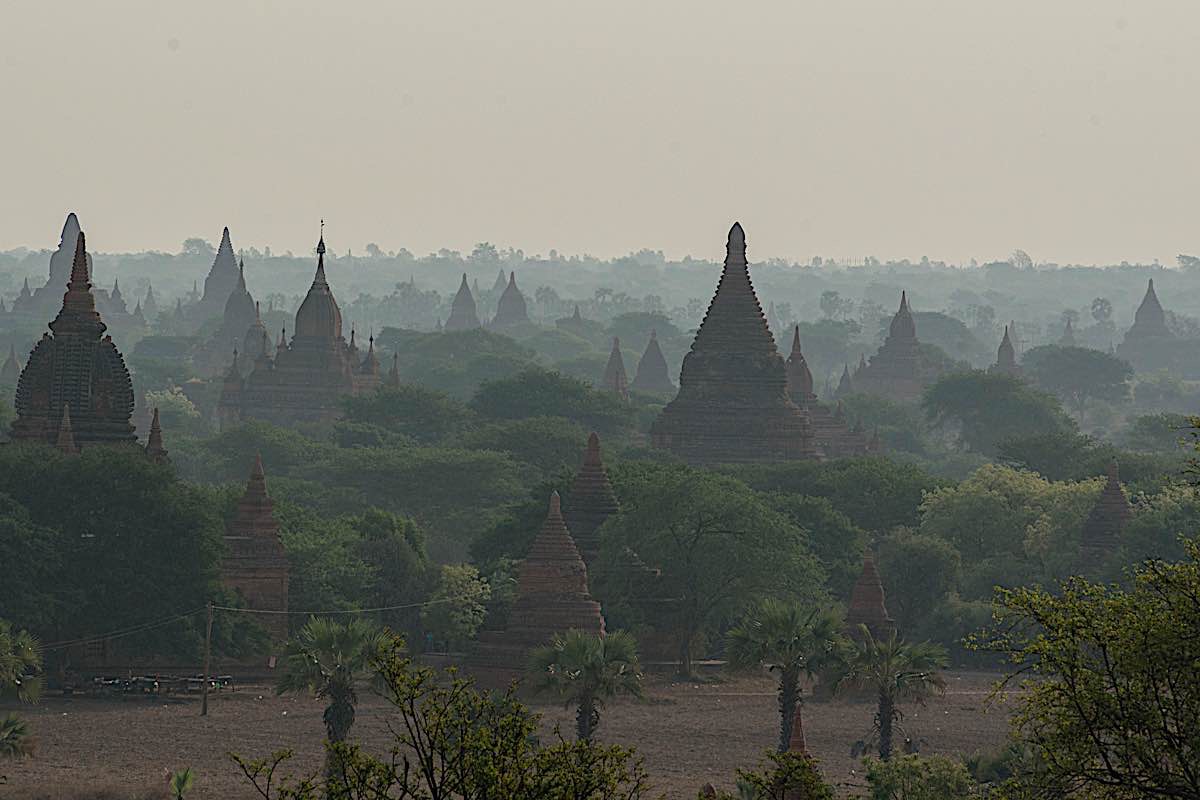 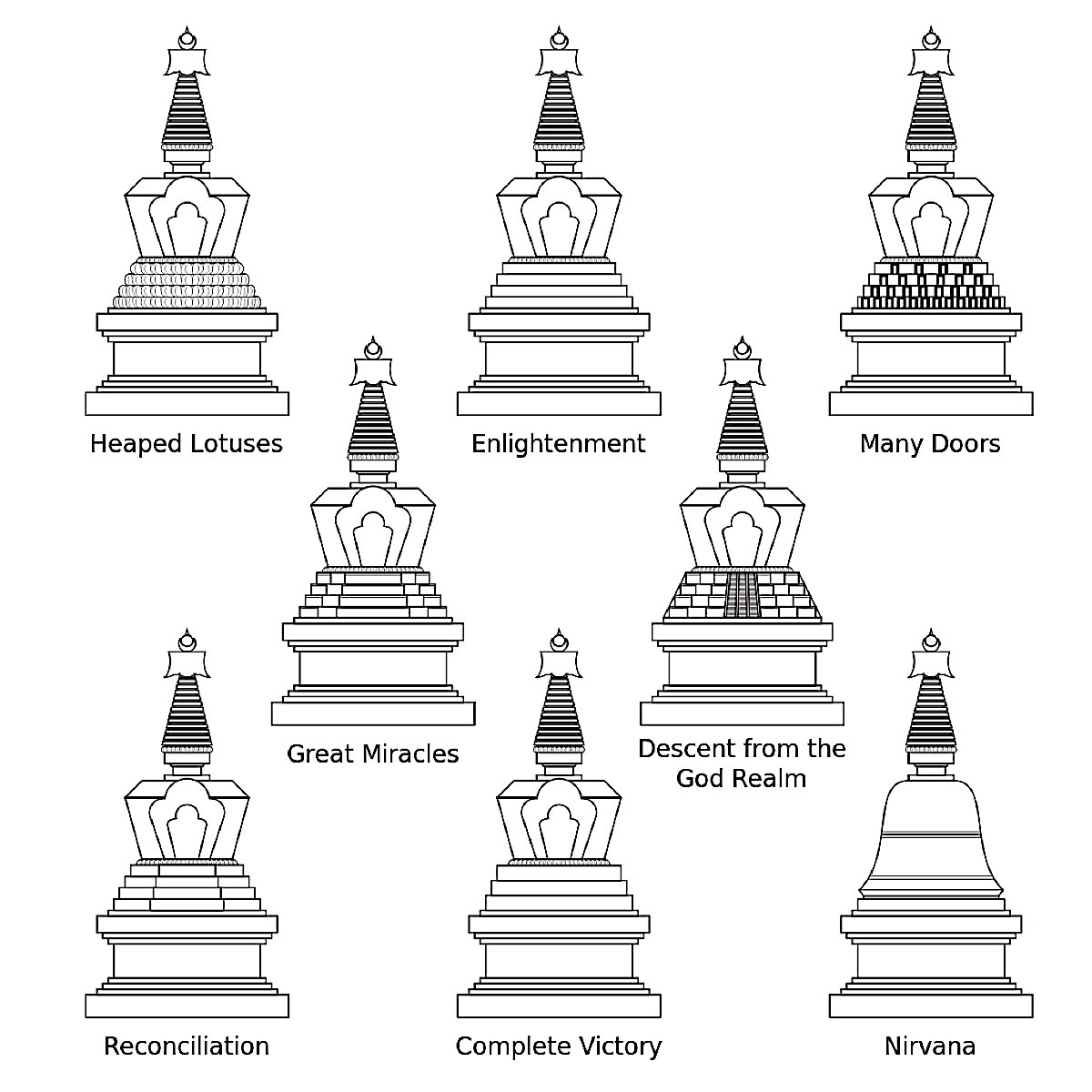 Although Stupas vary by region and culture somewhat, the typical symbolism is described as:

“The shape of the stupa represents the Buddha, crowned and sitting in meditation posture on a lion throne. His crown is the top of the spire; his head is the square at the spire’s base; his body is the vase shape; his legs are the four steps of the lower terrace; and the base is his throne.”

The Tibetan Chorten, especially, is profound in symbolism (see diagram), 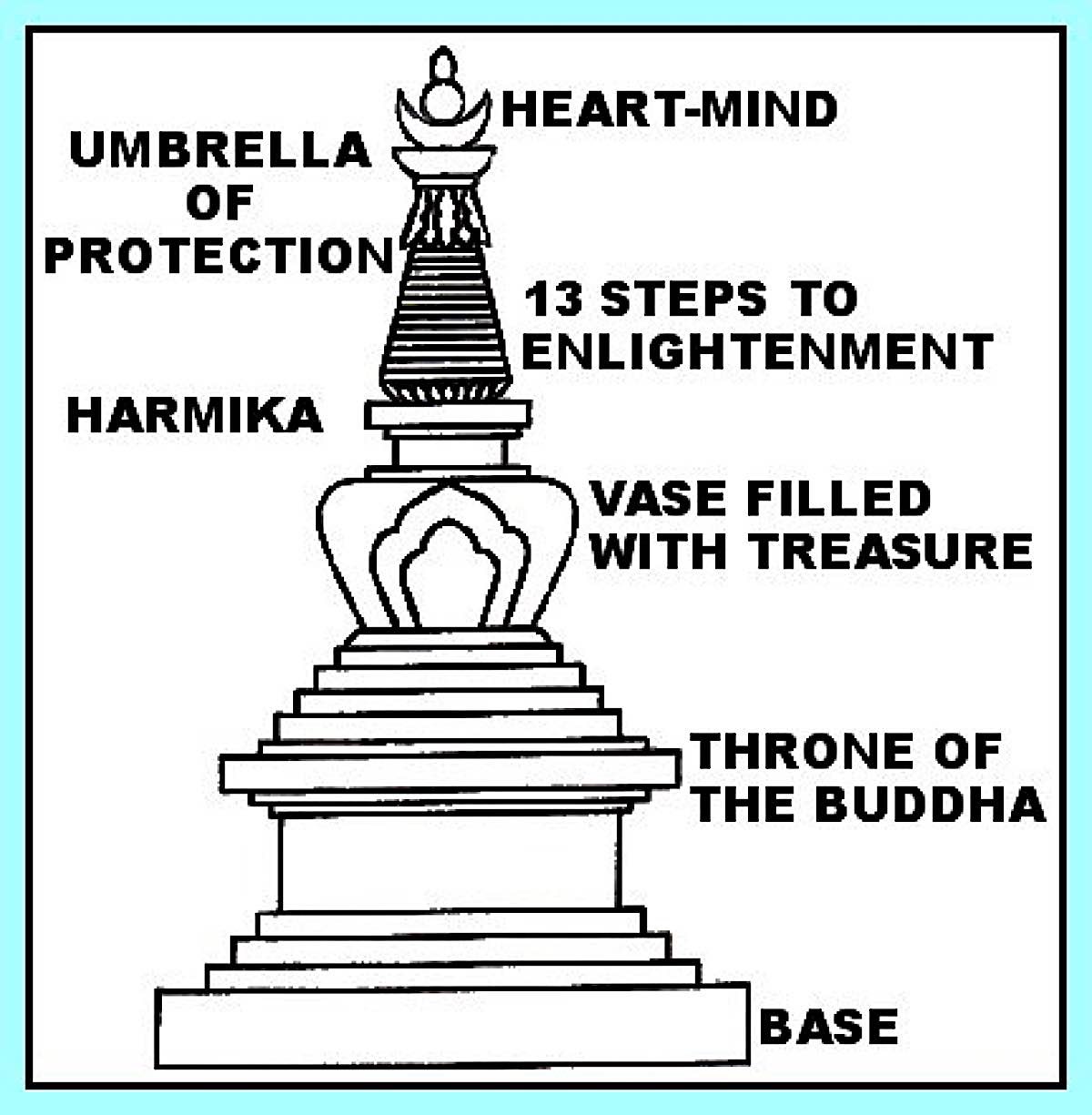 The main symbolism of the Chorten (Tibetan Stupa) structure.

This also represents the five elements: 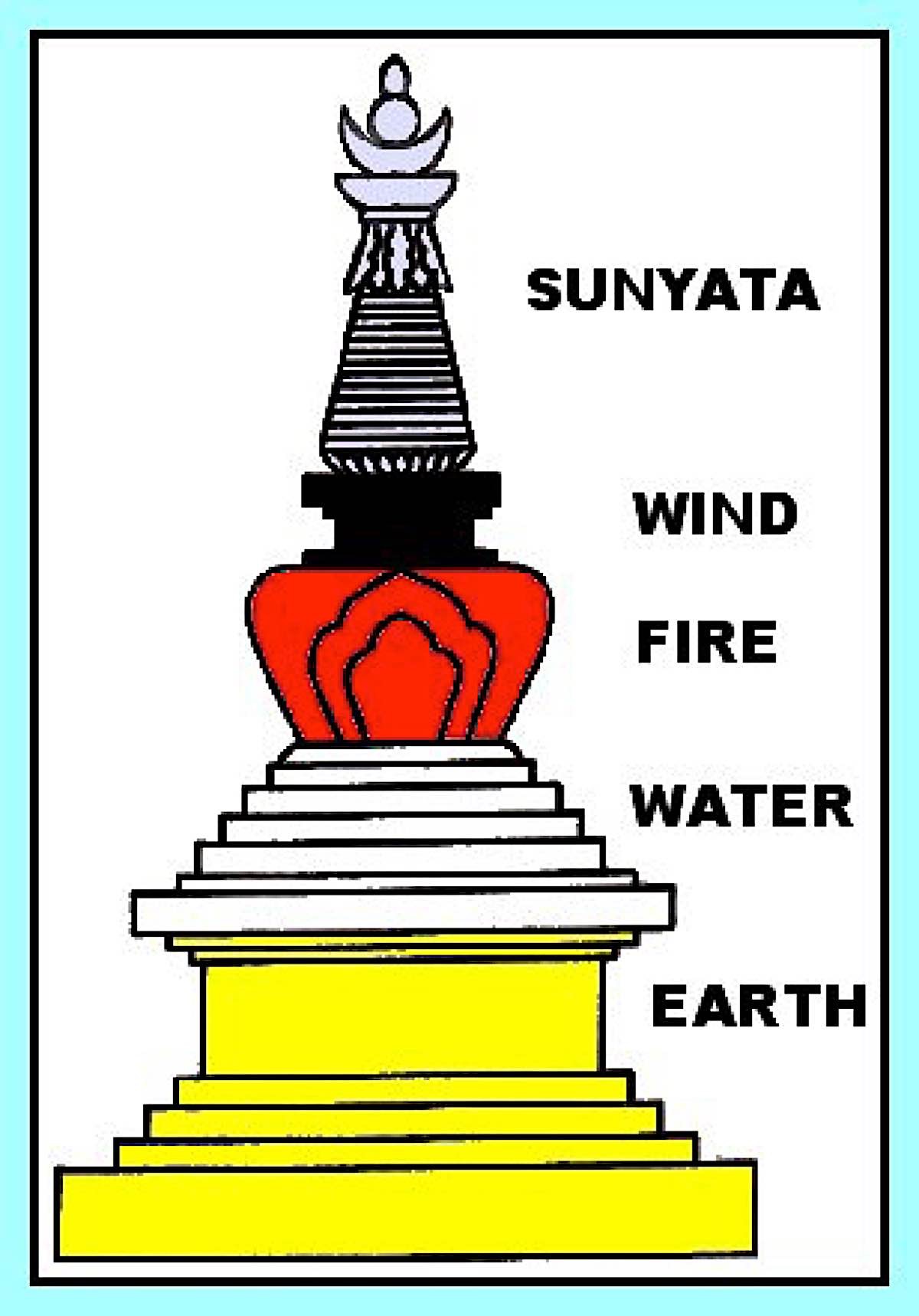 Stupas are near-universal in Buddhism, although the names and shapes vary somewhat:

There are also different “purposes” for stupas. The most common are “Votive Stupas” built all around the world for the benefit of students — with circumambulation as a key practice. Historically, there are also:

In history, and modern times

In ancient times, Emperor Ashoka was famous for building stupas and monuments. The great Emperor, built stupas to help purify the negative karmas of “emperor building.”

Today, many Buddhist centres build stupas to benefit sentient beings. A current project of Gaden for the West in Canada [Inset below] is funding a stupa, under the inspiration of H.E. Zasep Rinpoche, who wrote:

“According to Buddhist tradition, we build stupas to honour the Buddhas, as well as those who have passed away–those we have loved so much.

“After Bhagavan Buddha entered paranirvana, his disciples Maha Ananda, Shariputra, Subhuti, and so on decided to construct a structure for Bhagavan’s holy relics, as an object of prayer, to create merit, and as a reminder of his precious teachings and great kindness. Stupas are also known as Caitanya, dagoba, and chorten (in Tibetan). The great Buddhist King Ashoka built one million stupas in India in honour of Lord Buddha’s teachings and for the purpose of purifying unwholesome karma and accumulating merit for future generations. Our Stupa will benefit our sangha and community in many ways, including creating the cause for good health, harmony, peace, prosperity, and especially increased Dharma realizations. Building stupas is a tradition in both Hinayana and Mahayana Buddhism (in such places as India, Burma, Ceylon, Thailand, Tibet, Mongolia, China, Indonesia, and Japan). There are eight different designs of stupas to commemorate the life of the Buddha.” 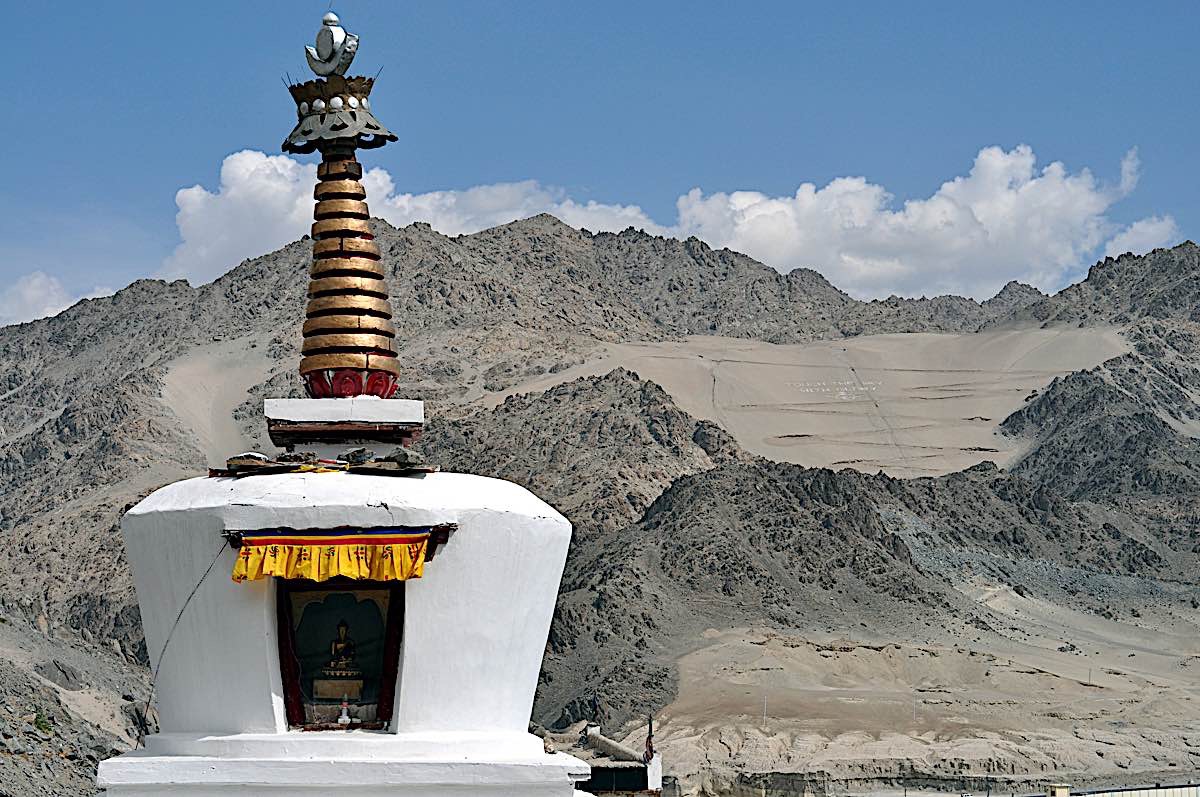 A more traditional Stupa in Ladakh.

Build them, circumambulate them, honour them

Stupas are built to house relics, often a tiny fragment of a Holy relic. They are also typically filled with Holy items, such as numerous rolled mantras, tsa-tsa’s, statues, blessed herbs and objects.

In particular, the “throne” — which is the base — is filled with precious mantras and objects, including offerings of jewels, sacred texts and symbols of the Dharma. Only new or perfect objects are included, and everything is blessed. 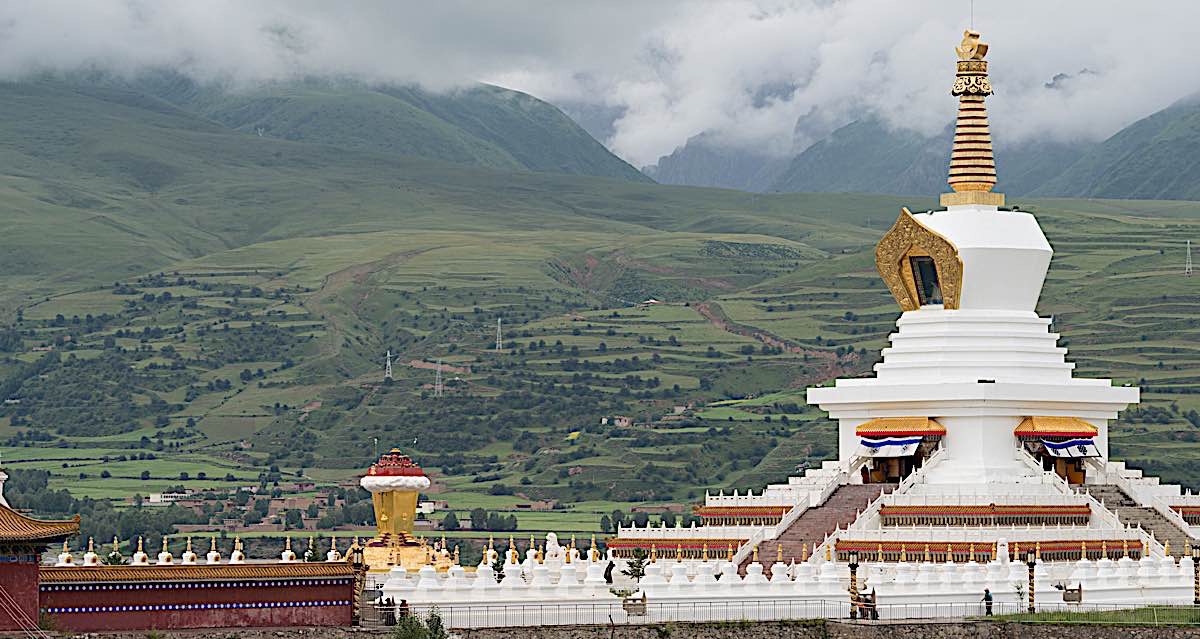 The eighteen benefits of building Stupas

According to the Je Nampa Djepe Do Sutra, those involved in building a stupa (volunteers, patrons who donate funds, organizers) will enjoy some of the eighteen benefits of building sutras in future lives (and indeed some merit in our current life — as always, depends on your ripening karma):

1) One will be reborn In a royal family.

2) One will get a beautiful body.

3) One’s speech will be entrancing.

4) One’s mere sight will be a great joy for the others.

5) One will have a charming and attractive personality.

6) One will be erudite In the five sciences.

7) One will become a support (an example for all).

8) One will be praised from all directions.

9) One will be Inclined to sounds and words of Dharma.

10) One will live only with happiness.

11) One will be venerated both by men and.gods.

12) One will obtain great riches.

14) All one’s wishes will be fulfilled.

15) One’s beneficial activity and wisdom will only grow.

16) One’s body will become as indestructible as the Dorje.

17) One will be reborn In the higher realms or existence.

18) One will reach quickly perfect Awakening. 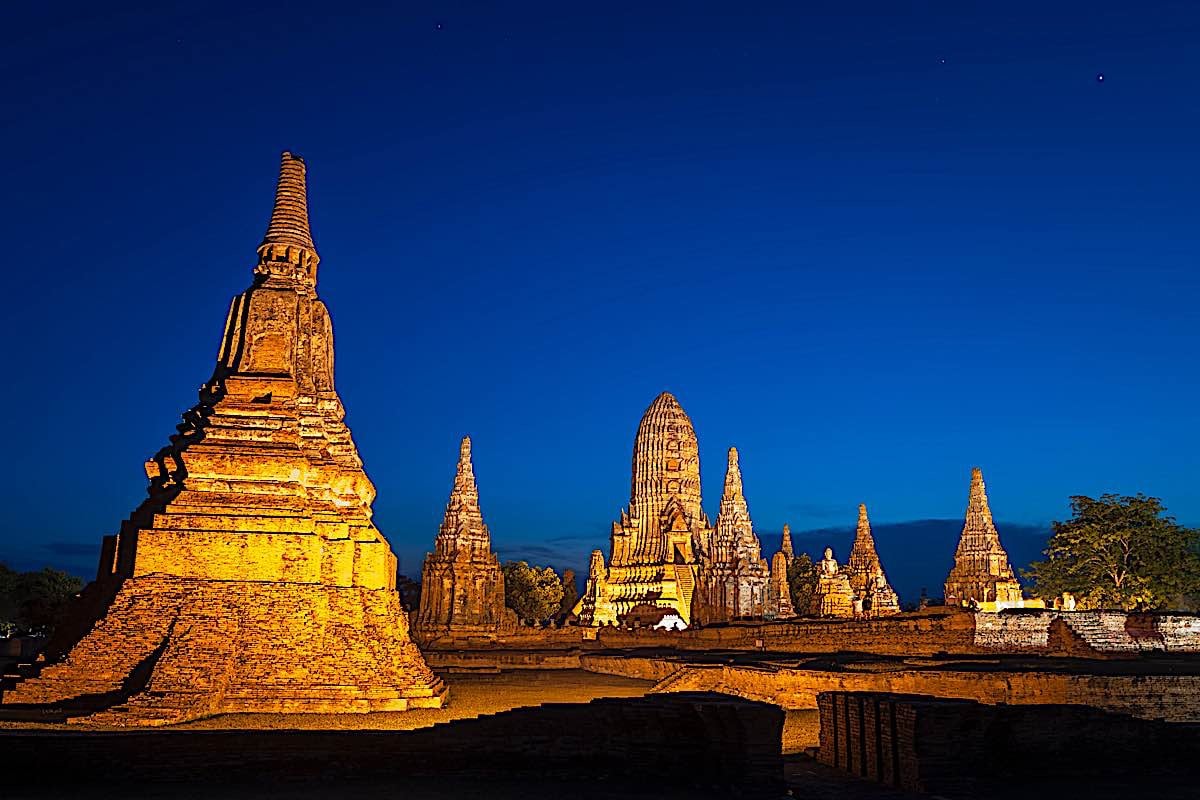 Many teachers encourage students to build small stupas at home or to contribute to the building of larger stupas at Dharma centres. One such current project is underway at the Retreat Centre of Gaden for the West.

I am excited to begin a project that is long overdue. I would like to build a stupa to honour our gurus, grandparents, parents, friends, and family members—especially remembering our friends who passed way in the last few years. According to Buddhist tradition, we build stupas to honour the Buddhas, as well as those who have passed away–those we have loved so much. 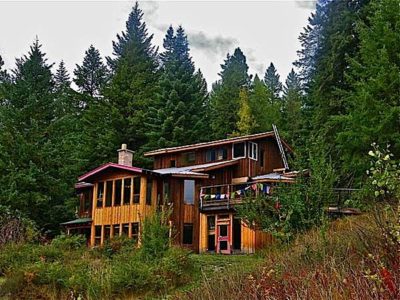 The perfect place for retreats, Tashi Choling, near beautiful Nelson, B.C. This will be the site of a new Pagoda being built in 2020.

After Bhagavan Buddha entered parinirvana, his disciples Maha Ananda, Shariputra, Subhuti, and so on decided to construct a structure for Bhagavan’s holy relics, as an object of prayer, to create merit, and as a reminder of his precious teachings and great kindness. Stupas are also known as Caitanya, dagoba, and chorten (in Tibetan). The great Buddhist King Ashoka built one million stupas in India in honour of Lord Buddha’s teachings and for the purpose of purifying unwholesome karma and accumulating merit for future generations. Our Stupa will benefit our sangha and community in many ways, including creating the cause for good health, harmony, peace, prosperity, and especially increased Dharma realizations. Building stupas is a tradition in both Hinayana and Mahayana Buddhism (in such places as India, Burma, Ceylon, Thailand, Tibet, Mongolia, China, Indonesia, and Japan). There are eight different designs of stupas to commemorate the life of the Buddha. Traditionally, stupas are constructed at most Buddhist temples.

Our Stupa will be a Bodhi Stupa in honour of the enlightenment of Buddha Shakyamuni. This is the first Stupa built in Southern British Columbia, Canada. I personally believe this Stupa will bring blessings, peace, happiness, and harmony for our sangha community, as well as for Canada and the world. Inside the Stupa, we will place many holy relics, Buddha statues, tsa tsas (small Buddha images), small stupas, lots of mantras, prayers, precious and semi-precious stones. We will also include herbs such as sandalwood, saffron, teak wood, agaru, juniper, sage, lavender, and arnica. Additionally, we will also include grains, silk, cotton, sheep wool, camel hair, yak hair, horsehair, and feathers of various birds like eagles, raven, and peacocks, which symbolize auspiciousness and prosperity.

Our plan is to build a 17-foot-high stupa in the Tibetan style right next to the temple in Nelson during July and August of next year (2020). Since it is a monument, we don’t even need a building permit in Canada. We are free to do whatever we wish. What a great country we live in! I would like to get organized right away. We will need to begin gathering the materials as soon as possible. When the construction has been completed there will be a consecration ceremony at the end of August or early September. The construction will depend on the help of many volunteers, but there will be significant cost for the materials. I expect we will need roughly $20,000 Canadian Dollars. Donations are coming in already and sooner is better for us. (The mantras and texts alone will be over 100 kilograms.) We plan to ship these items ready made from Mongolia by DHL sometime in March 2020. We will need silk, cotton, incense, and so on. The most expensive item is a gold-plated bronze sun and moon that will adorn the very top of the Stupa. Other materials include concrete, metal, bricks, and timber.

Many people have asked how they can help. You may offer some of the objects that will go inside the Stupa such as semi-precious stones and herbs. Also, you can help us share this message with others. If you are able to donate money to help us make this vision a reality, I would be so grateful. Instructions for donating to Gaden For The West through PayPal are available on the Gaden for the West website. (Please do not send any donations directly to me.) Gaden for the West will issue tax receipts for all donations, but please remember that the most meaningful part of donating to this project is the opportunity we have to create merit and good karma.

Our sangha and I appreciate your support and kindness very much. Together we will create a lot of good karma and wonderful merit!

Much Love and Blessings, 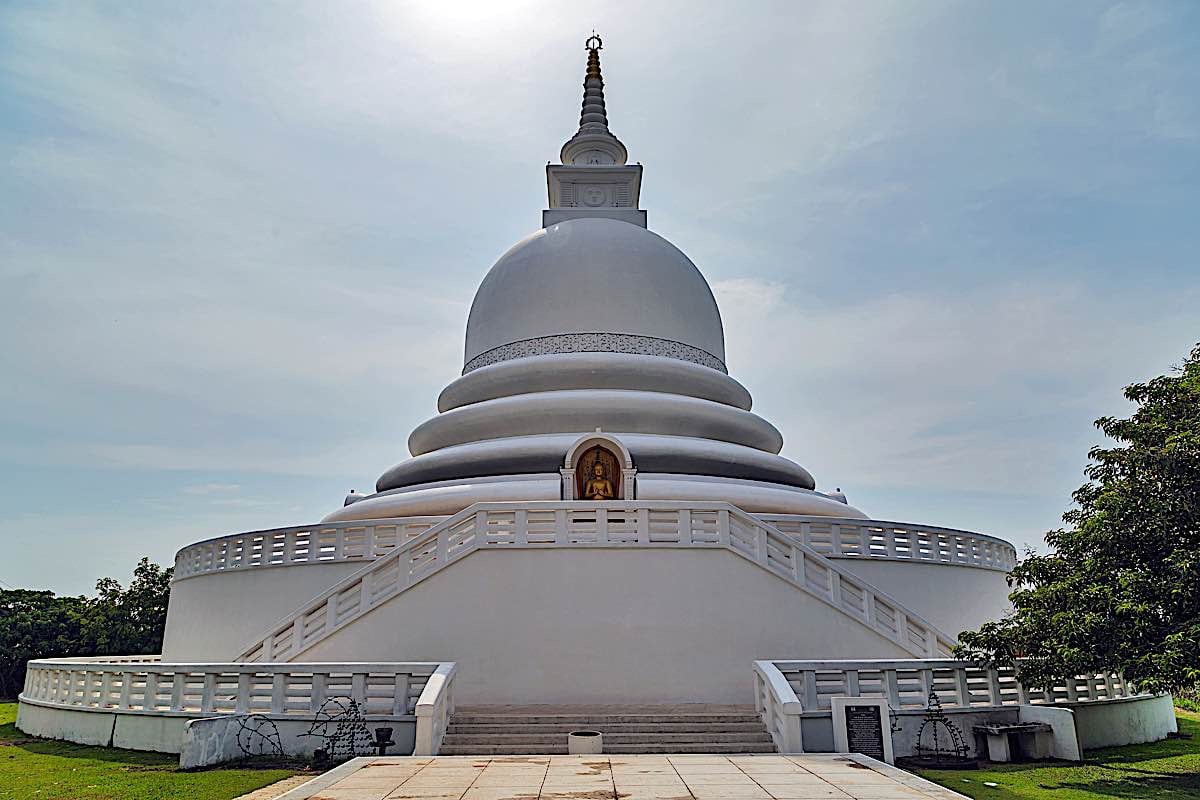 Book Excerpt “Transcending” — an important book that embraces the Trans Path: “What is body anyway?”

The 16 Defilements of the Mind, and the Simile of the Cloth: Vitthupama Sutta