Video: Celebrating 40 Years of Dharma Practice in Remote Tasmania! One of the oldest Dharma centers in the West Commemorates with Retreat, and a Party

Dancing and singing seems like an appropriate way to bring in a celebration of Dorje Ling’s 40 Years as a non-sectarian Dharma Centre — especially a Dharma retreat farm in remote and stunning island state of Tasmania. To live music, with appropriate lyrics of “Om Tare Tuttare Ture Svaha” the lucky students and friends partied outdoors. 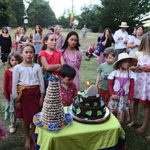 The 1970s vibe resonated through the event, from retro posters to cool, live music and dance — and of course teachings and retreats! All ages partied and received teachings.

Where better to absorb the essence of Dharma than in the stunning beauty of Tasmania? The lucky anniversary attendees received teachings in Mahamudra, as well as a Medicine Buddha initiation and practice. At the end of teachings, the dancing began. 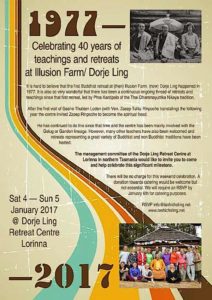 Today, situated on 48 acres of beautiful forest, the centre was first called Illusion Farm, a very 70-ish name. Illusion Farm, the current day Dorje Ling Retreat Centre, has hosted continuous retreats and teachings since the first teachings led by Phra Kantipalo of the Thai tradition in 1977. Shortly after, in 1978, the most Venerable Geshe Thubten Loden of the Gelug Tibetan tradition gave teachings, with the Venerable Zasep Tulku Rinpoche there as translator. The centre was so taken with Venerable Zasep Rinpoche, they invited him to become their spiritual head. Venerable Zasep Rinpoche is now the spiritual head of many centers in what is now known as Gaden for the West (with gompas, retreat centres and meditation centres in Australia, Canada, and the United States and Europe.)

Even with set backs such as the 2016 flood, the Gompa continues to flourish in beautiful Tasmania.

Dorje Ling retreats may come as close to the Yogi’s cave retreat as a modern-day aspirant could hope for. Dorje Ling’s rustic Gompa, an hexagonal log building is equipped for retreats, with kitchens, a caretaker, a long-term teacher’s residence, and solar powered retreat huts is ideal for retreatants seeking to really escape the stress of urban living. Dorje Ling is as wild and wonderful as it gets, with camping space, walking trails, forests and nearby whitewater.

The most Venerable Zasep Tulku Rinpoche’s history with the centre goes back to 1978, just after he first came to Australia in 1977. Although Zasep Rinpoche is also spiritual director of all Gaden for the West centres in Australia, Canada and the U.S., Rinpoche regularly delivers teachings at Dorje Ling. For Buddha Weekly features, including teachings, videos and commentaries, mentioning Zasep Rinpoche, visit>>

A review of Zasep Rinpoche’s biography, A Tulku’s Journey from Tibet to Canada is here>>

Buddha Weekly is currently running as series of 10 short videos, Advice from the Teachers, which feature Venerable Zasep Rinpoche>>

Celebrating the extraordinary activities and life of His Holiness Kyabgon Gongma Trichen Rinpoche, the Sakya Trichen

3 thoughts on “Video: Celebrating 40 Years of Dharma Practice in Remote Tasmania! One of the oldest Dharma centers in the West Commemorates with Retreat, and a Party”