The forgotten nuns of Zanskar: 9 Buddhist nunneries in “one of the coldest inhabited places” have limited electricity, water and healthcare

As you might expect of 185 devoted Buddhist nuns, they ask for very little, but here in Zanskar Valley — one of the most isolated valleys in the Himalayas — many live without heat, water and electricity. Some of the nuns are children, as young as four years old — and the oldest nun is 88.

They are not quite “forgotten”, but they cope with being cut off from the rest of India; a single lane road, open only 7 months a year, connects this frigid valley — at 3500 meters above sea level — with the rest of India. 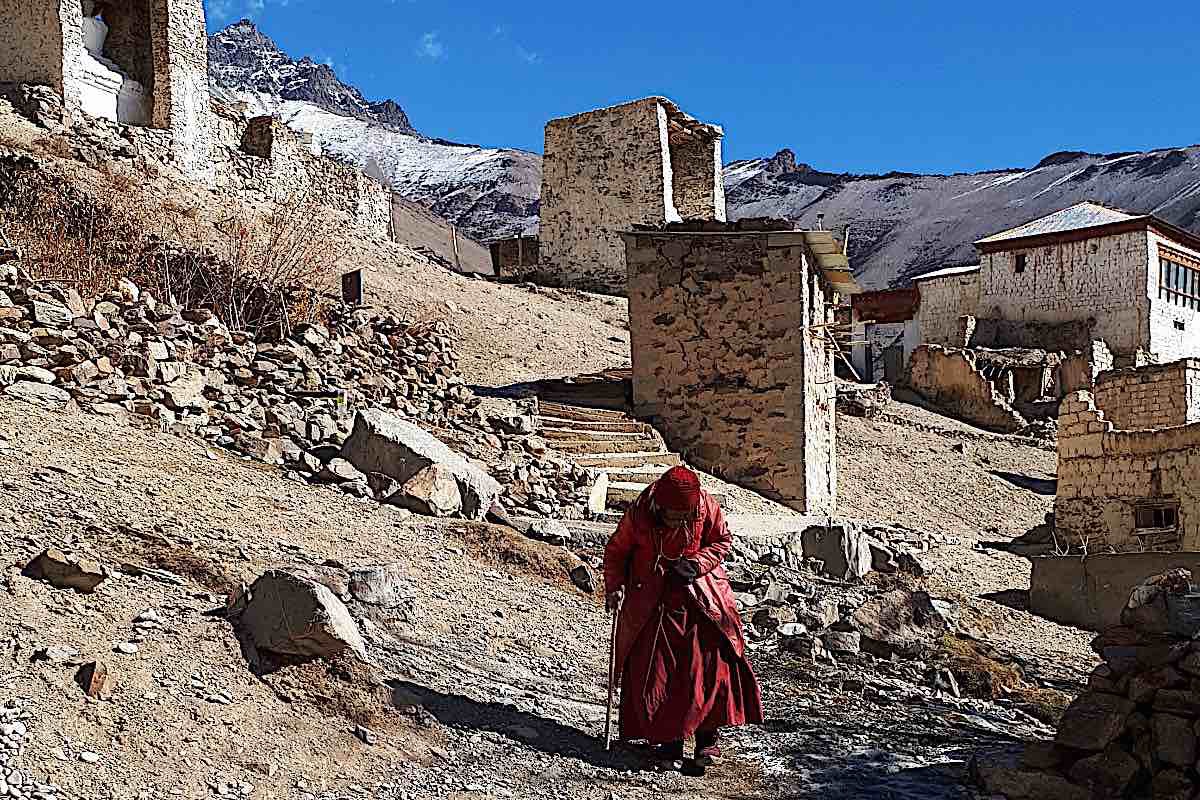 An elderly nun makes her way by foot through the humble buildings at Karsha Nunnery in Zanskar Valley.

A rugged vehicle is needed to traverse the so-called road. For all of these reasons — and the severe poverty in the region — the nuns of Zanskar are “almost forgotten. Here, money is scarce, but it pays for a lot. 20 dollars feeds a nun for one entire month. $5 gives the nuns transportation to the local health clinic. A hundred dollars can put a nun in clothing, shoes and hygiene products for an entire year. Those dollars are hard to come by in the remote, nearly forgotten region.

Imagine living with limited heat, in a perpetually cold climate, with only a few hours of electricity per day. In some areas, the nuns must melt ice for water. Some of the nunneries have no communal kitchen. 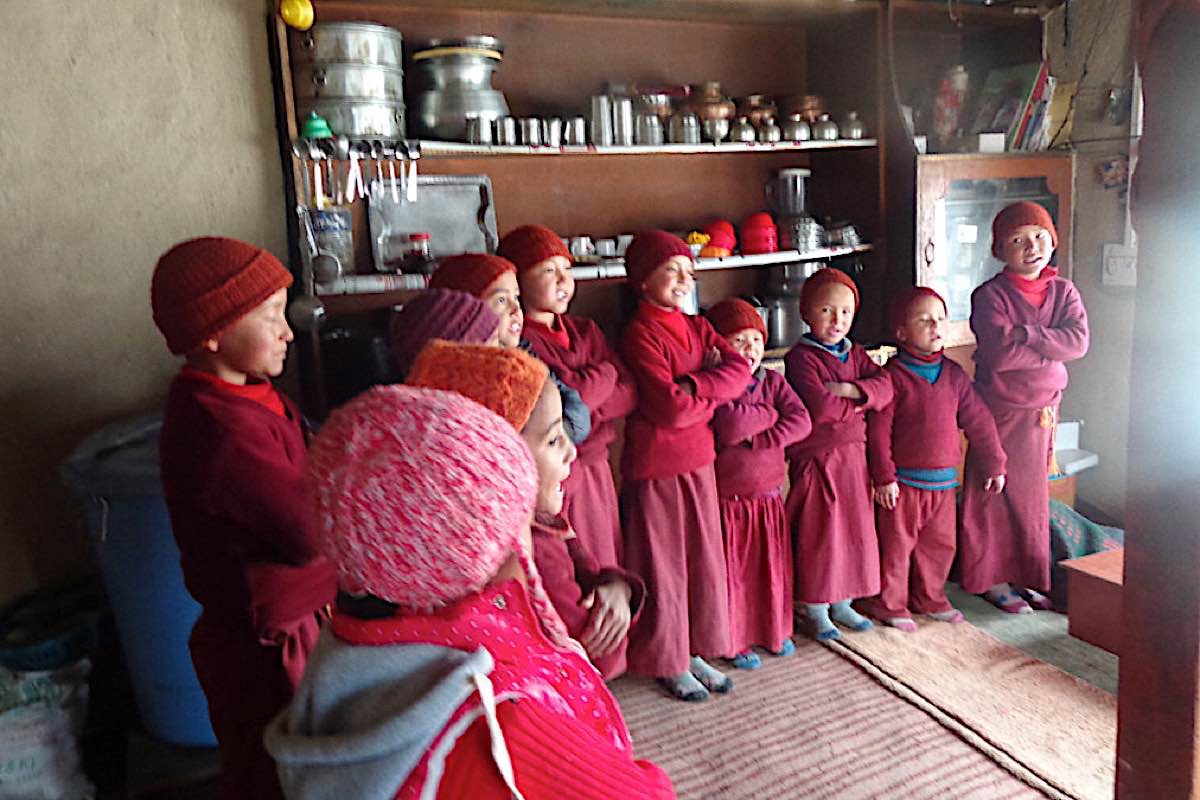 Many of the nuns of Zanskar are children who may have limited access to education and healthcare.

Unlike other areas, where the locals help the nuns with ample donations of food and clothing, Zanskar valley is impoverished — and typically the monks receive the better donations. Their best hope of aid comes from Gaden Relief, a tiny certified charity in Toronto, Canada, who have helped the Zanskar nuns since 1991.  Last year, Irina Safonova of Gaden Relief, a Canadian certified charity, was touring the valley, to see first hand what their most urgent needs were, which led to the current GoFundMe fundraising.

The nunneries in Manda, Rizhing and Byra are the worst off in the valley, with a critical shortage of everything, even heat and food, and basic healthcare. Shoes and clothing must last years, not months. For housing, they built simple structures themselves. They have limited access to Dharma teachers. 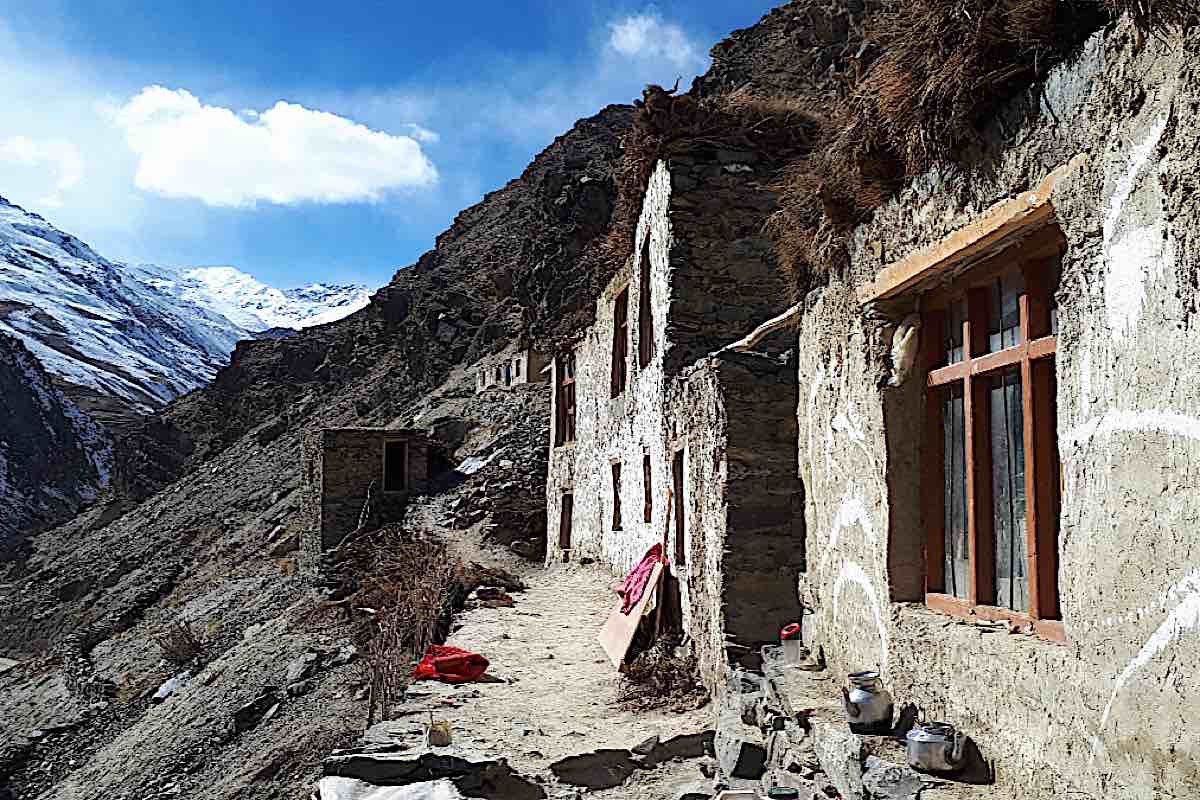 Many of the buildings were built by the nuns themselves and pair. There is only one single-lane road into the valley, accessible only a few months per year.

Unfortunately, the reality of the area is frigid cold, lack of food, poverty, and gender inequality — women are not empowered or equal in the region. Nuns simply are the last to receive donations. 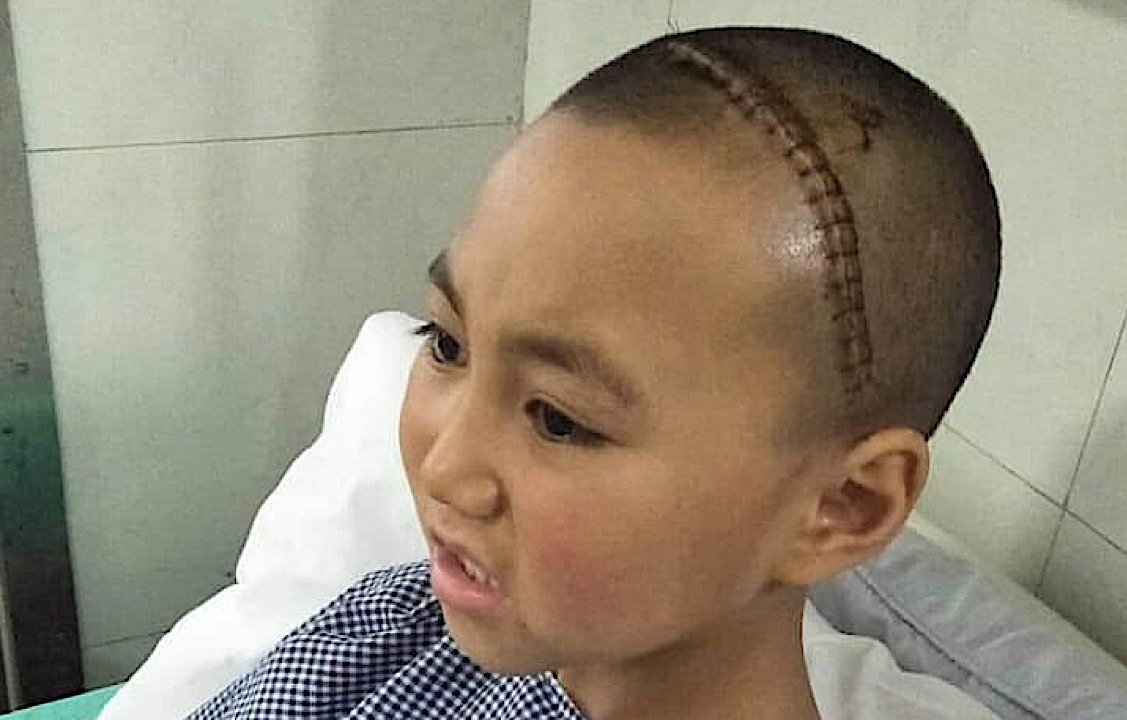 Young nun Stanzin is in recovery and good spirits after neurosurgery. The surgery was only possible after an urgent appeal at a weekend retreat in Toronto. The attendees at the retreat donated money to help pay for her surgery. She had to be flown to the hospital.

Last year, when one child nun needed urgent neurosurgery, there was no way to care for her in the valley. [We covered the story of the nun Stanzin in a previous story, here>>] By western standards, her surgery was a bargain — but there was just no money to pay for it. If not for the quick action of Gaden Relief, she may not have been able to have the 24×28.3mm cystic lesion removed from her left parietal lobe. Irina Safonova of Gaden Relief, asked close students of H.E. Zasep Rinpoche to donate for the emergency. Together, the Gaden Choling sangha raised funds for the surgery.

Irina Safonova, from Gaden Relief took a special interest in the isolated and humble nuns of Zanskar. She visited last year, assessed what was need, and has now organized a GoFundMe relief drive. Ninety-five percent of donations directly benefit the nuns, since the charity is run entirely by unpaid volunteers. 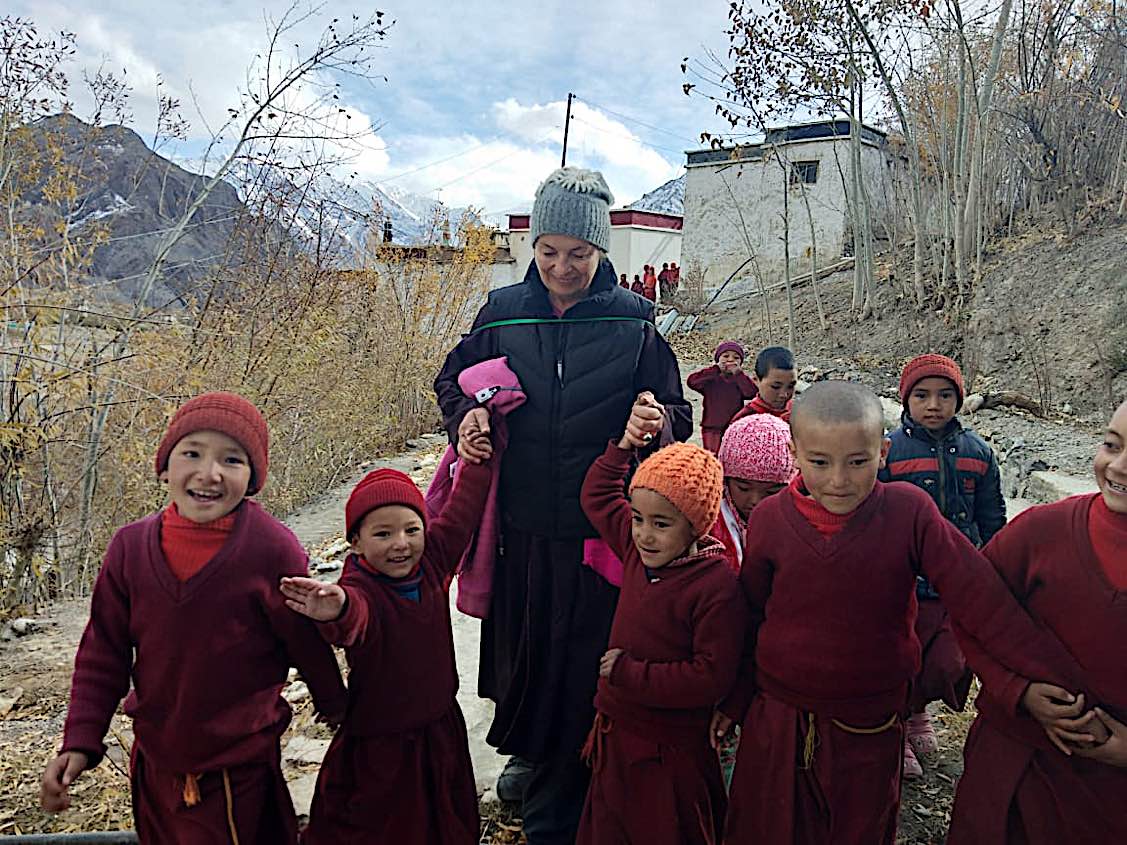 Irina from Gaden Relief visited the nuns a few months ago. Many of the nuns are children.

This time, instead of emergency surgery, the funds will be allocated to the simpler things we take for granted in the west: food, water, heat, and electricity, and healthcare.

Some of the needs are infrastructure since they have little in the way of water and electricity. A few of the nunneries have solar power for a few hours a day, thanks to some past donations. 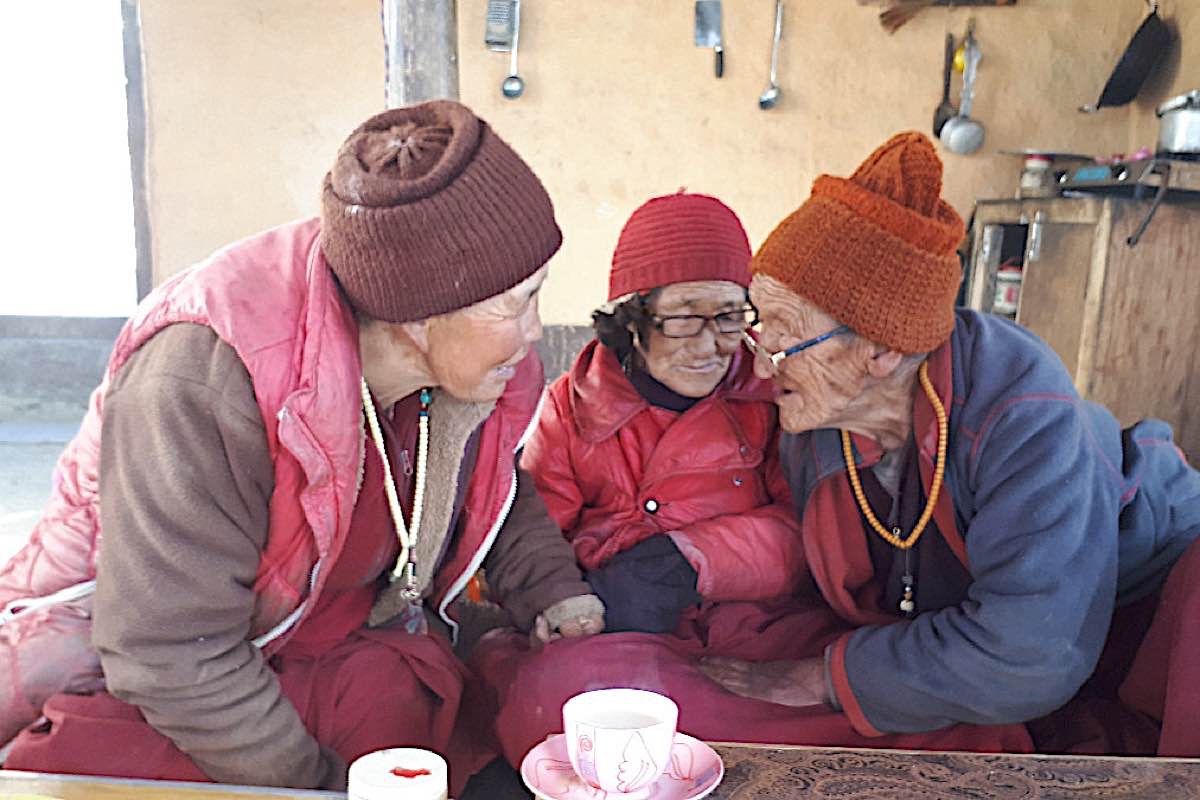 Some of the nuns are quite elderly, the oldest 88.

The ongoing relief projects they hope to fund with this latest GoFundMe campaign — a very modest amount of $20,000, will go to: 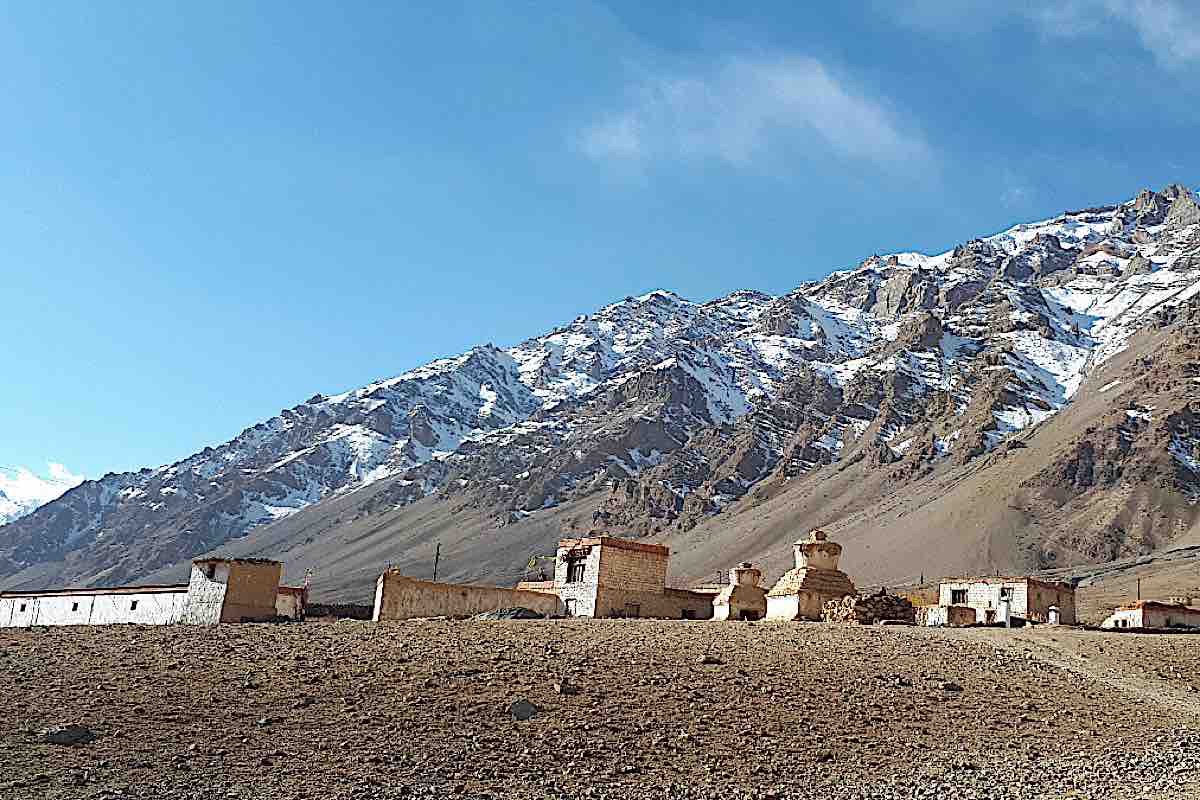 Pishu nunnery is in a very remote area, cut off from road access for much of the year.

In addition ongoing essentials — things we tend to take for granted — will be funded, such as:

What does Buddhism say about the idea of God? Best answer: ‘it’s complicated.” Are Buddhists theists, atheists or non-theists? Does it even matter?

Body mandala practice in Vajrayana Tantric Buddhism — and riding the winds of the inner body “Where mind goes, the body follows”

Three Principal Paths of Lama Tsongkhapa: from the land of snows, the peerless path of Renunciation, Bodhichitta, Shunyata