Support us on Patreon

Podcast 4: How can Guanyin Avalokiteshvara (Kanon, Kuan Yin) Protect us from the 10 Great Fears and Dangers? 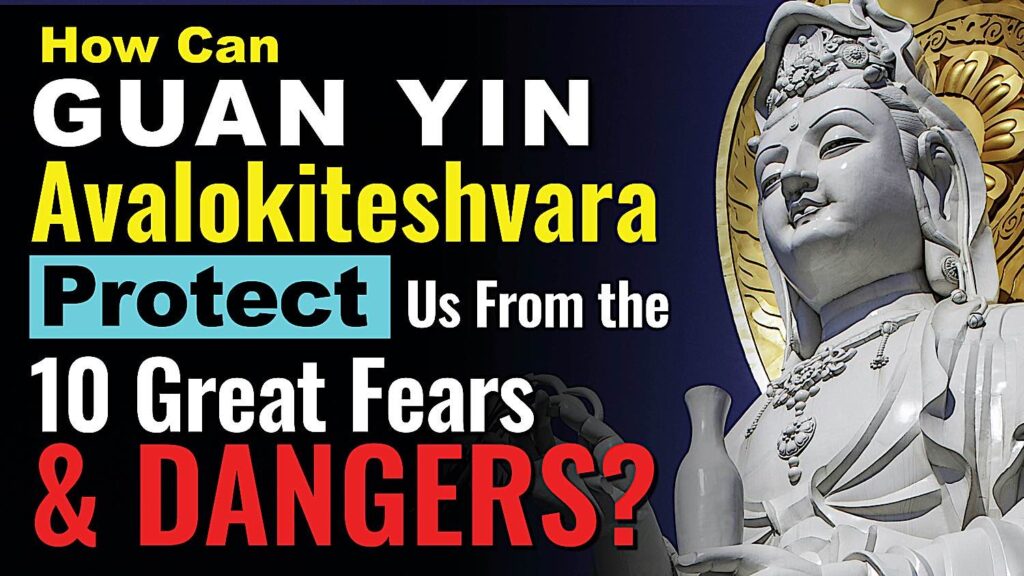 How can Guan Yin (Kuanyin) Avalokiteshvara Protect us from the 10 Great Fears and Dangers?

·      Please consider supporting our “Spread the Dharma” mission on Patreon at https://patreon.com/buddhaweekly and enjoy exclusive content and advance screenings. Thank you!

It should also be listed on (or appear shortly on):

Transcript: How can Guan Yin Avalokiteshvara Deliver Us from the 10 Great Fears?

In what way can Guan Yin Avalokiteshvara, the compassionate Bodhisattva, save and protect us from every danger? What ten great dangers does the Merciful Compassionate Kuanyin save us from? How can we invoke her help? Which sutra mentions the 10 Great Protections?

Before we begin, if you like this podcast, please subscribe and review.  Buddha Weekly. Helping to spread the Dharma!

Millions of devotees around the world call on the name of Guan Yin (Kuanyin) Goddess of Mercy, in times of need, fear, or despair. Aside from her best-known role as Compassion embodied — she is, after all, none other than Avalokiteshvara — she also protects against the ten great fears. Interestingly, one of the 10 great protections is protection from politics!

Avalokiteshvara also called Guanyin, Chenrezig, Kannon, and many other names, is immediately synonymous with the word Bodhisattva. He or She is the quintessential Bodhisattva — the superhero savior. His fame was first well established by Shakyamuni Buddha in the 25th Chapter of the wondrous Lotus Sutra, where Buddha makes it clear that Guanyin is ready to rescue all sentient beings.

Even Avalokiteshvara’s name is virtually the definition of a Bodhisattva — “Perceiver of the World’s Suffering.” He — or She since the ideal Bodhisattva is gender-flexible — is not just the “listener” of all of our suffering; the great Bodhisattva is the original “Savior”

The Ten great protections, as they are called in the Lotus Sutra, are the protective actions of a Mother protecting her children. Like a Mother, she doesn’t question her child’s integrity — even going so far as to rescue her sons and daughters from prison.

Guan Shi Yin is famous for rescues from harm — especially well known for rescues of anyone who calls out her name. Her devotees tell hundreds of tales of her rescues. When in trouble, they might simply call out her name praise:

In Buddhism, labels are just labels, and the name of the Compassionate Bodhisattva is another imputed label that just helps us relate to the Enlightened concept in our daily lives.  Guan Yin’s practice came to China as early as the first century AD from India, and from there spread to devotees in Japan and Korea. The compassionate Bodhisattva can be visualised as either female or male, but most visualise her as Goddess Guan Yin.   Yet, she is not separate or different from the male four-armed Avalokiteshvara, thousand armed Avalokiteshvara, and dozens of forms and emanations: loving, wrathful, passionate, fiery, protective — but always compassionate.

Compassion wears many faces — many of them the aspects of Avalokiteshvara (Chenrezig), also known as Guanyin, Guan Shi Yin, Quan Yin, Kwan Yin, Kannon, Kwun Yum, Kanzeon, Gwaneum, Quan Am, and many, many other names.

What’s in a name? The qualities of mercy and compassion. The appearance of beauty, motherly wisdom, tenderness. The activities of kindness, help, protection, nurturing — Mother.

Avalokiteshvara is so intensely focused on saving everyone from suffering, that he arises simultaneously in many forms — including one with one-thousand arms and multiple heads — and still, the great Bodhisattva hero never rests.

“The Lotus Sutra describes Avalokiteśvara as a bodhisattva who can take the form of any type of god including Indra or Brahma; any type of Buddha, any type of king or Chakravartin or even any kind of Heavenly Guardian including Vajrapani and Vaisravana as well as any gender male or female, adult or child, human or non-human being, in order to teach the Dharma to sentient beings.”

Although Avalokiteshvara is in many, many prominent sutras, it is in chapter 25 of the Lotus Sutra that we learn of the ten salvations (protections or deliverances) of Kuan Yin.

These are also called the ten protections. Simply think of Guanyin or Avalokiteshvara — in any of her forms, or say the mantra, Om Mani Padme Hum. When you think of Guanyin, she is already there.

Another practice is to recite the sutra verses as a protective practice or meditation.

Guanyin demands nothing of her followers. As an Enlightened One, freed from attachments, she has no need of offerings, worship, praise, devotions.

It is the Buddhist follower who needs the offering, worship, praise, devotions. These acts are positive acts of Karma — Guanyin’s gift to us. She gives us the opportunity to extinguish our past impurities and negative karmic acts with meritorious acts. She asks only one thing — that you share her value of Compassion and Metta (love) for all sentient beings.

Say the verses out loud, or think them — with faith — to help bring the blessings of Guanyin, from Chapter 25 of the Lotus Sutra:

Deliverance from the Dangers of Fire

If there are people who wish to harm you

by pushing you into the great pit of inferno,

the inferno pit will be transformed into a water pond.

Deliverance from the Dangers of Water

If you are drifting in a great ocean

with dragons, fishes, and other demons,

the waves will be unable to swallow you.

Deliverance from the Dangers of Falling

If you are at the summit of Mount Sumeru,

and someone pushes you off the edge,

you will be suspended in midair like the sun in the sky.

Deliverance from the Dangers of Politics

If you are suffering from the punishment of government,

and your life is about to end by execution,

the sword will be splintered into pieces.

If you are being locked in a prison

and your hands and feet are being bound by chains and fetters,

you will be released and freed.

Deliverance from Curses or Poisons

If there are people who wish to harm you

by curses or poisonous herbs,

the effects will be bounced back to the originator.

If you face harm from vicious zombies,

no one will dare to harm you.

If you are surrounded by evil beasts

with sharp fangs and fearful claws,

they will quickly flee and scamper away in all directions.

If you have disputes before the court,

or are fearful in the midst of the war,

all enemies full of resentment will retreat.

Deliverance from Lack of Children

If there are any who wish to give birth to a child, they should worship by giving offerings to Bodhisattva Kuan Yin; who will bestow them a child blessed with good fortune, virtue, and wisdom.

In the Lotus Sutra, Kuanyin is properly titled “Bodhisattva Perceiver of the Cries of the World.” These fears represent all fears. It is said that the Bodhisattva Kuanyin can save from every danger. Simply call out her name, or chant her mantra

Although Kuanyin is open to all, and has compassion for all, don’t wait for dangers or fear to call out her name. Take refuge in Buddha Dharma and Sangha — the Three Jewels — and chant her mantra often.

Listen now, and chant along, as the amazing Yoko Dharma chants Om Mani Padme Hum, the powerful mantra of the Compassionate One, the Bodhisattva Who Perceives the Cries of the World.

Podcast 4: How can Guanyin Avalokiteshvara (Kanon, Kuan Yin) Protect us from the 10 Great Fears and Dangers?

Podcast 1, Spread the Dharma: Stumbling on the Buddha and the Eightfold Path — plus 5 other podcasts

Podcast 5: Hayagriva, the Wrathful Aspect of Amitabha: How Can He Help Us in Troubled Times?

Podcast 3: Ganesha, the Remover of Obstacles and Protector of Prosperity, Buddhist Ganapati