Remembering a Great Teacher: the learned and inspiring Gelek Rimpoche of Jewel Heart International left behind a sparkling jewel of Dharma teachings

The very learned and respected Gelek Rimpoche passed away April 15, 2017 at 6am — a great loss. [1] Born in Tibet in 1939, the great teacher spread the Dharma through his profound teachings, wonderful books and videos online. He was famous for his prodigious memory, penetrating insight and wisdom. The founder of Jewel Heart International, Rimpoche was a teacher of impeccable lineage, respected and loved by students and teachers around the world.

A tribute from Roshi Joan Halifax:

Beloved Gelek Rinpoche has gone beyond……..
With his passing, we remember that life is so fragile, so brief.
We have little time to awaken in perfect unselfishness.
Rinpoche gave so much to so many.
He is an inspiration for all of us.
We must remember his way, his great teachings on bodhicitta.
My heart aches knowing that he is now not among us as a living being
but his great heart will never leave us.

From an interview in Mandala magazine, he describes his own background:

“I have been recognized as the incarnation of one of the Gyuto Tantric College abbots called Tashi Namgyal. I believe I was recognized by the late Pabongka Dechen Nyingpo – the famous Pabongka. I studied at Drepung Monastery from the age of 4 until I was 20. I completed my geshe studies in that time. I’m from the Gelugpa tradition and am a student of Kyabje Trijang and Ling Rinpoche, as well as a little bit of Song Rinpoche, too.” 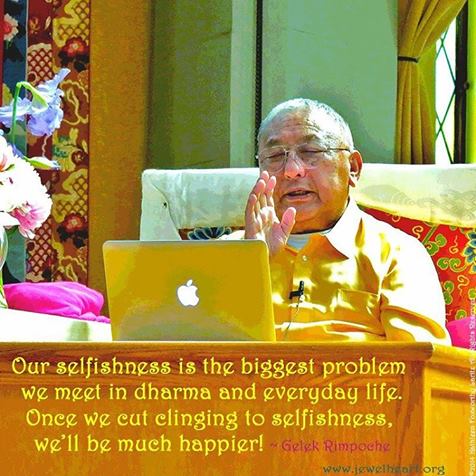 Later, he was director of Tibet House in Delhi India and a radio host in India. His radio interviews of over 1000 people documented the history of the fall of Tibet. His teachers directed him to move to the West to teach in the late 1970s.

He is among the last generation of great teachers to have brought teachings to the world after the invasion of Tibet in 1959. He is best known, perhaps, for his approachable teachings to Western practitioners of Tibetan Buddhism.

He founded Jewel Heart in 1988 and has brought teachings to students in person, by video and through books and digital teachings. He is well known for his national bestseller Good Life, Good Death. He became a U.S. citizen.

His collection of teachings, carefully preserved in a digital archive by Jewel Heart, reveal a teacher of vast learning. His videos and video workshops are also popular, and lately his series, “Sundays with Gelek Rimpoche” broadcast at 11am on Sundays to a wide audience.

Even for those who never met Gelek Rimpoche, the sense of loss is especially deep. The lineage of teachings he transmitted were very carefully preserved by him. Through him, and other great teachers in the West today, we feel connected to the very great masters from Tibet’s long past.

The tributes to Gelek Rimpoche are pouring in on the Jewel Heart site, with comments from his many students and notable teachers. >>

I received word of Rinpoche’s passing. Losing a lama is one of the most difficult experiences I’ve gone through, in part because it brings home just how remarkably fortunate I’ve been to meet a true Dharma teacher who can guide me. I’m always amazed that somehow little ol’ me created the cause for such fortune, And now my teacher gone.

But our lamas are never gone. They reside in our hearts forever in the form of the teachings and guidance they’ve given us. We can turn to that at any time to help guide our thoughts, words, and actions. Plus our daily practice of guru yoga and reciting a glance meditation on the lamrim renews our contact with them every day. Our teachers taught us, they believed in our ability to practice the path and to become kinder and more compassionate people. And now that Rinpoche’s physical manifestation is no longer here, out of respect and love for him, we must step up and carry on his work of cultivating wisdom and compassion in our own hearts and in the world. All of you are like light beams radiating from Rinpoche’s heart, carrying the message of the Dharma into the world by how you live your life and how you continue sharing the Dharma with others.

So please support and love each other as you grieve together and go forward to awakening together.

Some of his many teachings, 35 in in digital form, can be found on the Jewel Heart site>>

There can be no doubt that this great teacher made use of every day and every night to further the Dharma.

This life, you must know
as the tiny splash of a raindrop.

A thing of beauty that disappears
as it comes into being.

Therefore, set your goal.
Make use of every day and every night.

Biography of Gelek Rimpoche from the Jewel Heart Website

Born in Lhasa, Tibet, in 1939, Kyabje Gelek Rimpoche was recognized as an incarnate lama at the age of four. Carefully tutored from an early age by some of Tibet’s greatest living masters, Rimpoche gained renown for his powers of memory, intellectual judgment and penetrating insight. As a small child living in a monk’s cell in a country with no electricity or running water, and little news of the outside world, he had scoured the pictures of torn copies of Life Magazine for anything he could gather about America.

Among the last generation of lamas educated in Drepung Monastery before the Communist Chinese invasion of Tibet, Gelek Rimpoche was forced to flee to India in 1959. He later edited and printed over 170 volumes of rare Tibetan manuscripts that would have otherwise been lost to humanity. Rimpoche was also instrumental in forming organizations that would share the great wisdom of Tibet with the outside world. In this and other ways, he played a crucial role in the survival of Tibetan Buddhism.

He was director of Tibet House in Delhi, India and a radio host at All India Radio. He conducted over 1000 interviews in compiling an oral history of the fall of Tibet to the Communist Chinese.

In the late 1970’s Rimpoche was directed to teach Western students by his teachers, the Senior and Junior Masters to His Holiness the Dalai Lama. Since that time, he taught Buddhist practitioners around the world.

In 1988, Rimpoche founded Jewel Heart, a Tibetan Buddhist Center. Rimpoche was particularly distinguished for his thorough familiarity with modern culture, and special effectiveness as a teacher of Western practitioners of Tibetan Buddhism. Recognizing the unique opportunity for the interface of spiritual and material concerns in today’s world, Rimpoche also opened a dialogue with science, psychology, medicine, metaphysics, politics, and the arts.

Rimpoche was a U.S. citizen and lived in Michigan. He passed away on February 15, 2017.

In Praise of the Vajrayana – A Brief Introduction to Buddhist Tantra

2 thoughts on “Remembering a Great Teacher: the learned and inspiring Gelek Rimpoche of Jewel Heart International left behind a sparkling jewel of Dharma teachings”