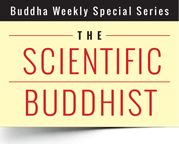 The Scientific Buddhist examines Dharma from the point of view of science. Do you have a topic idea? Please use the form below.

More than 2500 years ago, Shakyamuni Buddha explored the mind. Many scientists, such as Albert Einstein, were sympathetic (or practitioners of) Buddhism. The great wisdoms of the Buddha, the wonderful insights of the Enlightened Mind of Shakyamuni, do not contradict science. On the contrary, they are often mirrored in Quantum Physics concepts. Psychology also adopted many of Shakayamuni’s great skillful methods, including Mindfulness meditation, Visualization, and sound therapy.  Carl Jung, in particular, wrote extensively on Buddhist concepts as they were relevant to exploring psychology and the mind.

To view our past stories in The Scientific Buddhist, please click here>>

Other topics, such as Rebirth and Karma are — while not contradicted by science — more difficult to prove. In The Scientific Buddhist, we discuss these views, not necessarily with conclusive proof, but as a point of logical discussion. In some cases, we also report on “conclusive proofs” — such as our popular story, “Prominent Scientists Declare “All Non Human Animals… Are Conscious Beings”, and instead discuss how this impacts our practice of Dharma.

Do you have a story idea or topic?

Perhaps you’ve heard of a new study, or a psychological case study, or an interesting new theory in Quantum Physics that calls out for a Buddhist-oriented discussion. Please let us know with the form below, and we’ll attempt to research/develop a feature around the topic if possible: