Recently, Buddha Weekly interviewed the most Venerable Zasep Tulku Rinpoche, a learned Tibetan teacher of the Gelug lineage. The spiritual head of many temples and meditation centres in Canada, United States, and Australia, the eminent guru will make his semi-annual teaching round in Toronto, Canada in April 2016. (Full schedule below, or visit Gaden Choling website>)  IMPORTANT NOTE: There may be initiation requirements for some teachings. See prerequisites below. 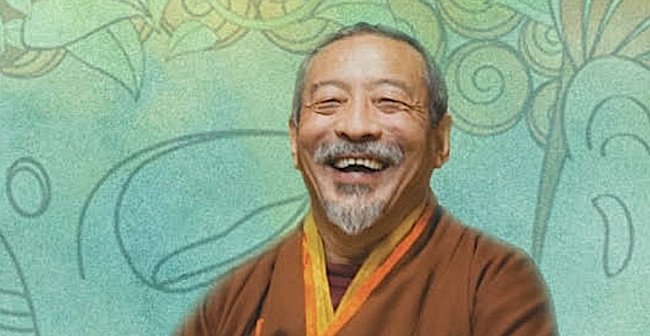 To Read the full interview with Zasep Rinpoche, see part 1, part 2, and part 3 of the interview.

Rinpoche Returns to Toronto after recent tours to Mexico and Mongolia

When I first interviewed Venerable Zasep Rinpoche he had just finished a full schedule of teachings and was about to perform a wedding at Gaden Choling. His schedule of teachings this season is even more gruelling, with events and retreats on all weekends in April and several events and initiations on week day evenings at Gaden Choling Toronto. He will also teach in Owen Sound, on behalf of Medicine Buddha Toronto and the Mindfulness Centre of Grey Bruce. 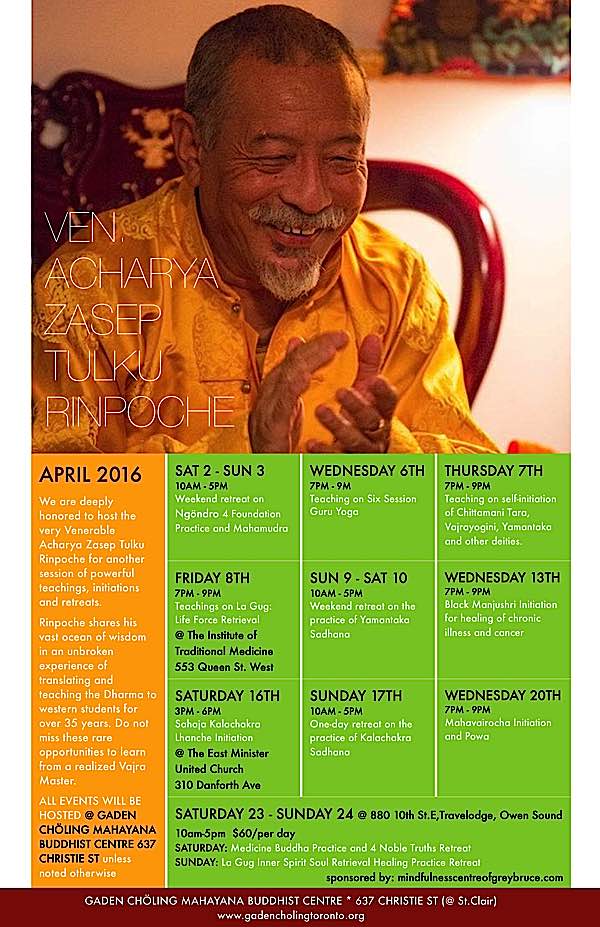 Most of the teachings will be at Gaden Choling Toronto, a meditation centre founded in 1981, and named by His Holiness Kyabje Ling Rinpoche at the request of Zasep Rinpoche. In addition, Rinpoche will perform Kalachakra initiations and teachings at the East Minister United Church. During his last weekend in Ontario, he will teach healing practices, including Medicine Buddha and La Gug Inner Spirit Energy Retrieval.

NOTE: Rinpoche’s guidelines for the teachings (prerequisites and/or commitments, if any): 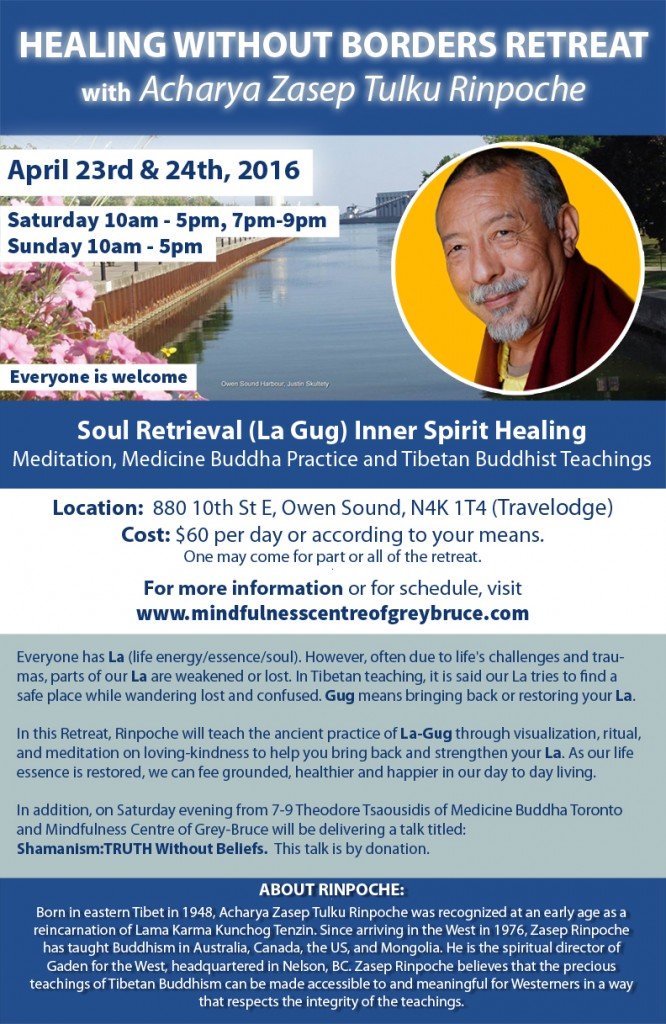 At Gaden Choling, Rinpoche will teach the preparatory foundation practices known as Ngondro (in Sanskrit “purvaka”.) Ngondro is common to all four schools of Tibetan Buddhism and Bon and are considered crucial preliminary teachings — prior to more advanced Generation and Completion Stage meditations.

In the recent Buddha Weekly interview with Rinpoche, the Venerable teacher explained: “for any student, it’s best to meditate on suffering and causes of suffering. Meditate on the four noble truths. Today, it’s important people study and practice Lamrim. That’s the graduated path. Don’t jump right away into Tantra. Don’t look for magic, quick solutions. If it’s too quick it doesn’t work well.

Ngondro is a part of the graduated path of Vajrayana Buddhism. On the second day of this special weekend, Rinpoche will teach Mahamudra meditation methods, considered among the most profound of Buddhist teachings.

All other teachings as specified in posters inset above.

When you recognize the nature of mind, fabrication and effort are naturally freed — Guru Rinpoche. Happy Guru Rinpoche Day!

Buddhism — a poem by Dan Brook, author of “Harboring Happiness: 101 Ways To Be Happy”