Tibetan Buddhism is known for the preservation of lineages of teachings, passed from teacher to teacher through the centuries. Gaden Choling Toronto, one of Toronto’s oldest Tibetan Buddhist Centres — established by HH Kyabje Ling Rinpoche, 97th Ganden Tripa and senior tutor of HH the Dalai Lama — will again host H.E. Zasep Rinpoche for an intensive ten-day round of teachings in July, featuring rare lineage empowerments.

A number of precious teachings

We could call it teachings by the numbers:

An eminent teacher with a grand lineage 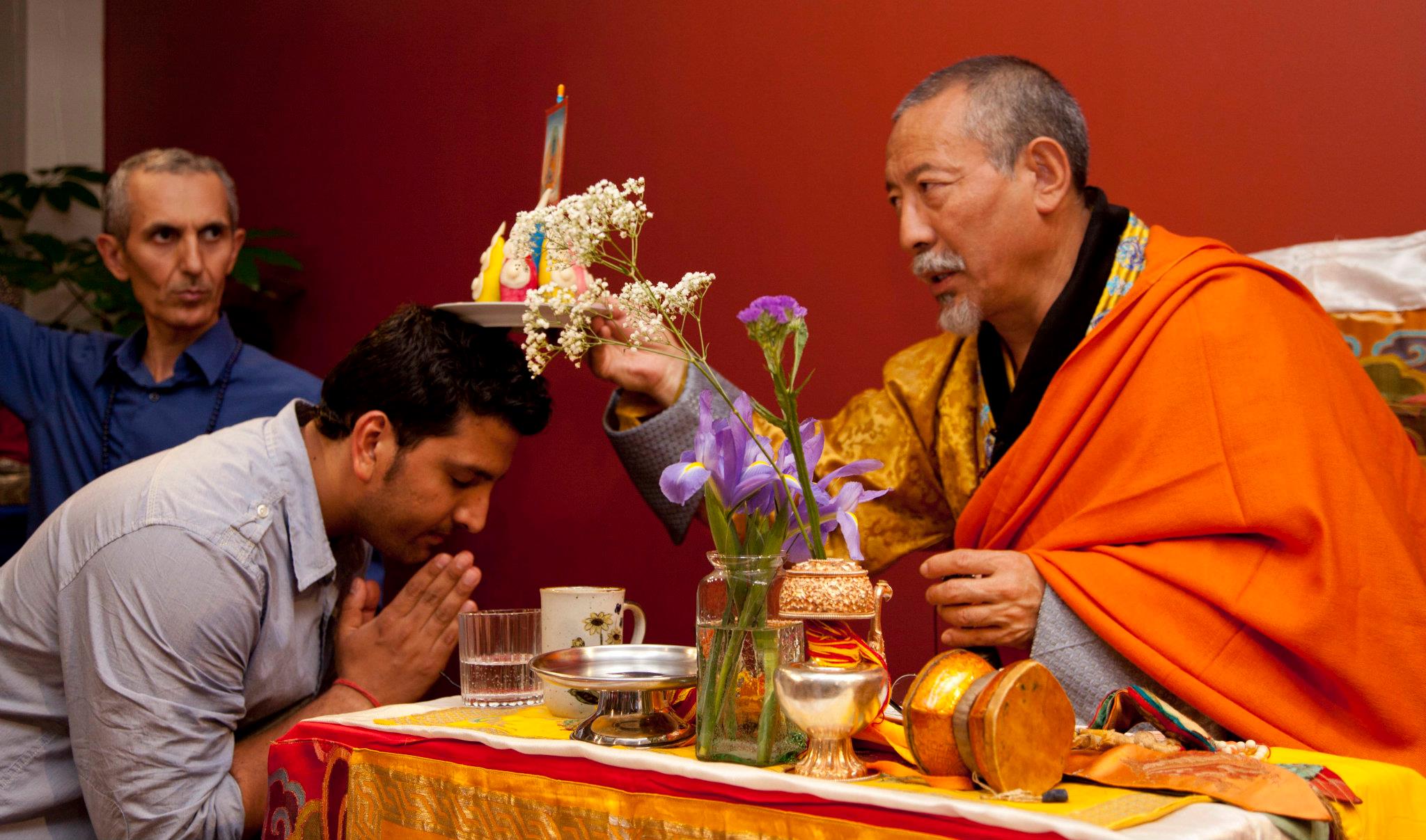 H.E. Zasep Rinpoche is spiritual director of many meditation centres and retreat centres in Australia, the United States and Canada and teaches also in Mexico and Mongolia. He is also the author of several popular Dharma books.

In this round of teachings in Toronto, there are two very unique and rarely offered empowerments: notably Five Dakini Chod, and Six-Armed Mahakala. 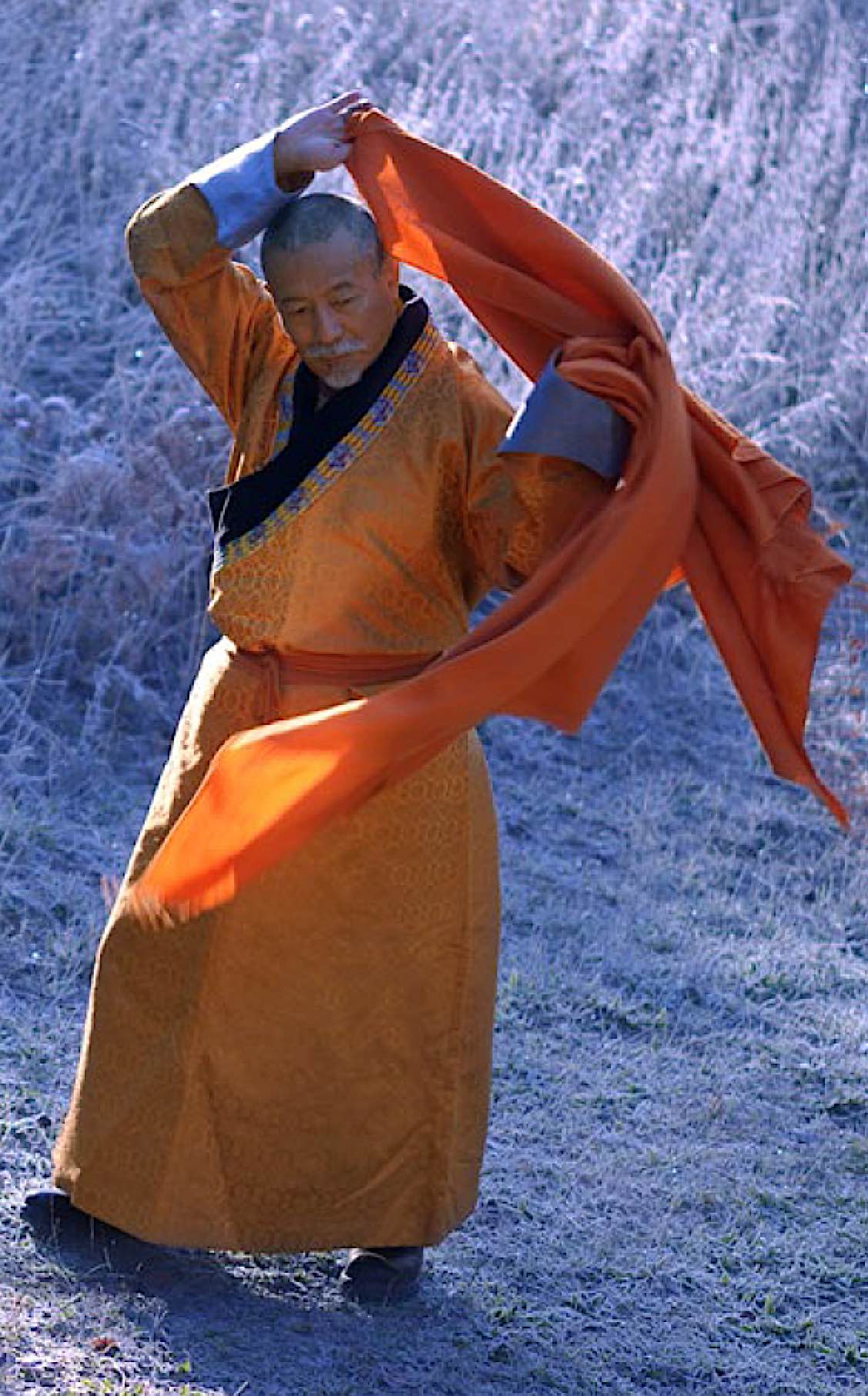 “Mahamudra meditation is awareness and understanding of the true nature of mind; it is spacious, without beginning or end. It is like observing the sky without the trace of birds, or the criss-cross of jet planes. You can merge your consciousness in the state of Mahamudra, beyond words and thoughts. The true nature of the mind is raw or naked awareness. It is an uncovered, untamed and unaltered state, without fabrication.”

The first full-weekend “mini-retreat” focuses on teachings on the Three Principal Paths (also called the “Three Precious Trainings” — teachings on Renunciation, Bodhichitta and Shunyata. There will also be teachings on “Meditation on Death and Dying,” a vital meditation that helps encourage devotion and urgency to practice. 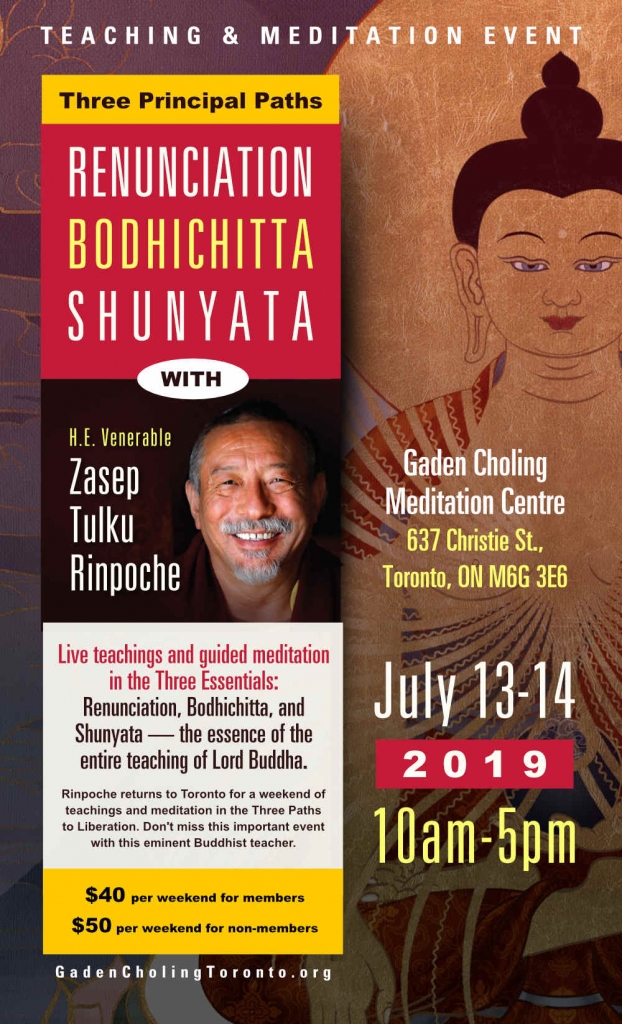 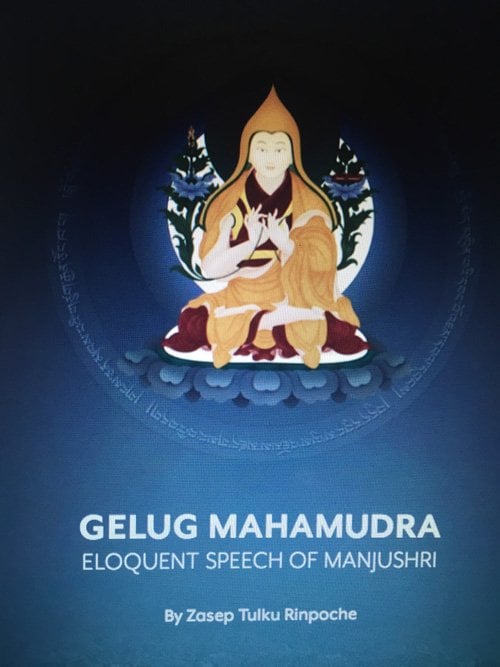 Cover of a  book by H.E. Zasep Rinpoche: Gelug Mahamudra, available on Amazon>>

One tantalizing aspect of the Three Principal Paths is that it is correctly described with both the words “Principle” and “Principal.” Sometimes described as the “Three Principles of the Path” — notably by the great Lama Tsongkhapa himself (see inset below, with the Lama Tsongkhapa’s description) — which connotes they are “principles” to practice by and also as the Three Principal Paths of the Buddha, meaning they are the main paths of Buddhism. Either way, they are the most important of all teachings, as they are a complete synopsis of the three things that are critical in Mahayana Buddhism:

H.E. Zasep Rinpoche will present this deep topic and teaching in easy-to-understand language, and with practice suggestions, in a condensed weekend of teachings. [See inset below: The Three Principles of the Path by Lama Tsongkhapa]

H.E. Zasep Tulku Rinpoche will provide a guided meditation in the Three Essentials: Renunciation, Bodhichitta, and Shunyata – the essence of the entire teaching of Lord Buddha. 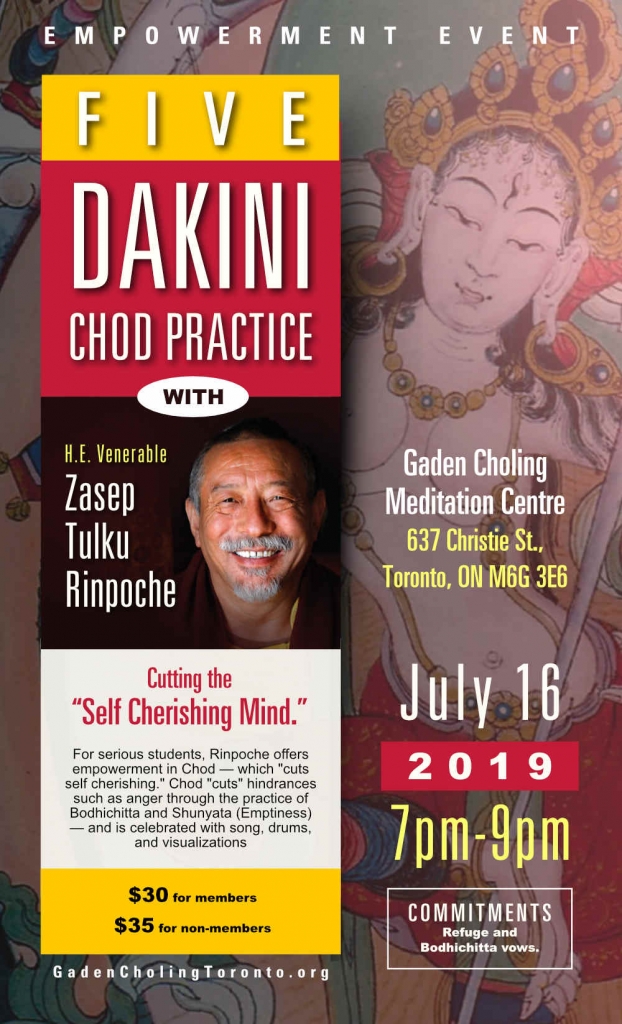 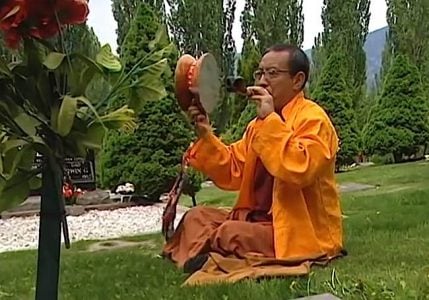 Advanced teachings, such as Chod, and other Vajrayana practices, require a teacher due to the precise, delicate and powerful nature of their impact on mindstream. Zasep Tulku Rinpoche practicing ancient Chod to benefit all sentient beings, a screengrab from the documentary film “Please Come Again.”

For serious students, Rinpoche offers empowerment in Five Dakini Chod – which “cuts self cherishing”. Chod “cuts” hinderances such as anger through the practice of Bohichitta and Shunyata (Emptiness).

Chod is often thought of as exotic and very effective, as it cust our attachments — yet despite it’s exotic flavour, it is very popular today.

Machig Ladron, the great Yogini of the 11th century taught Chod as a method to cut the four “devils” or “maras.” When asked by her student to explain the “devils”, she explained:

“Son, listen. These are the characteristics of devils (bdud). That which is called ‘devil’ is not some actual great big black thing that scares and petrifies whomever sees it. A devil is anything that obstructs the achievement of freedom. Therefore, even loving and affectionate friends become devils [with regard to] freedom. Most of all, there is no greater devil than this fixation to a self. So until this ego-fixation is cut off, all the devils wait with open mouths. For that reason, you need to exert yourself at a skillful method to sever the devil of ego-fixation. As adjuncts, there are three devils that are born from ego-fixation; thus we have the four devils that must be severed.

These are their names:

“Those are the four devils of ego-fixation. [1] 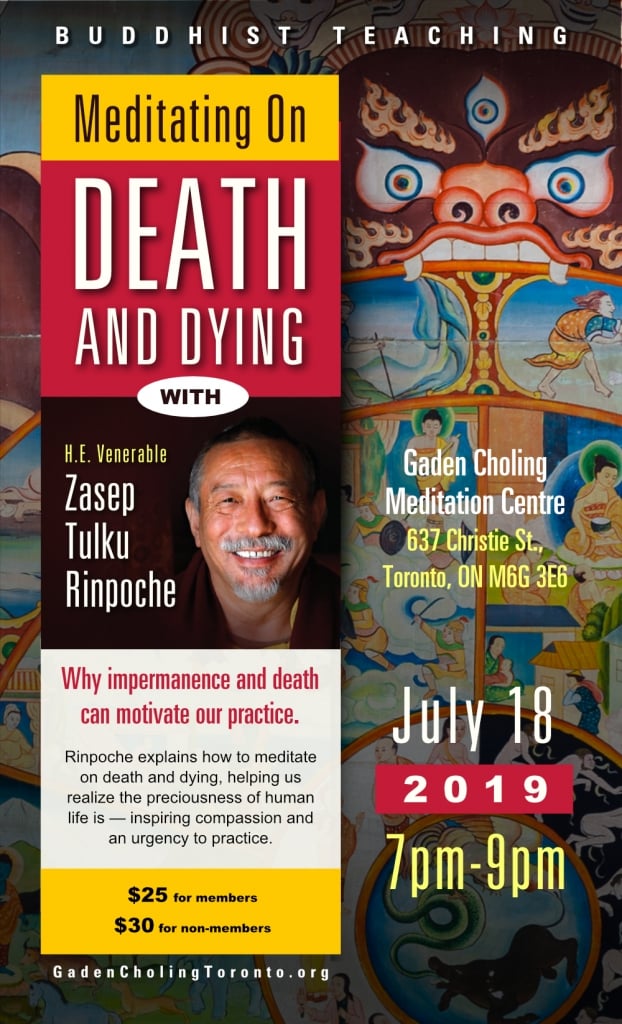 Meditating on Death and Dying to Motivate Practice

This teaching is being conducted on July 18 by H.E. Zasep Tulku Rinpoche from 7 pm to 9 pm ET. Why impermanence and death can motivate our practice. Rinpoche explains how to meditate on death and dying, helping us to realize how precious human life is – inspiring compassion and urgency to practice. 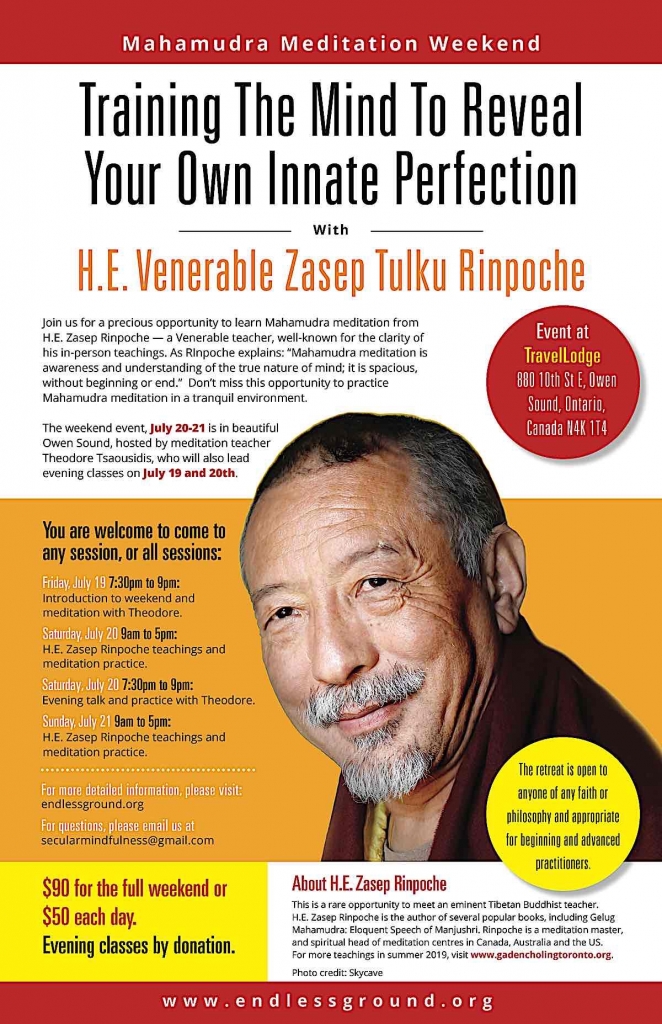 A beautiful location in Owen Sound is “picture perfect” for a weekend of deep Mahamudra meditations. Described as “Training the Mind to Reveal Your Own Innate Perfection” H.E. Zasep Rinpoche will lead many Mahamudra meditations. This is a combined event with teacher Theodore Tsaousidis from Endless Ground [EndlessGround.org ] https://endlessground.org/ 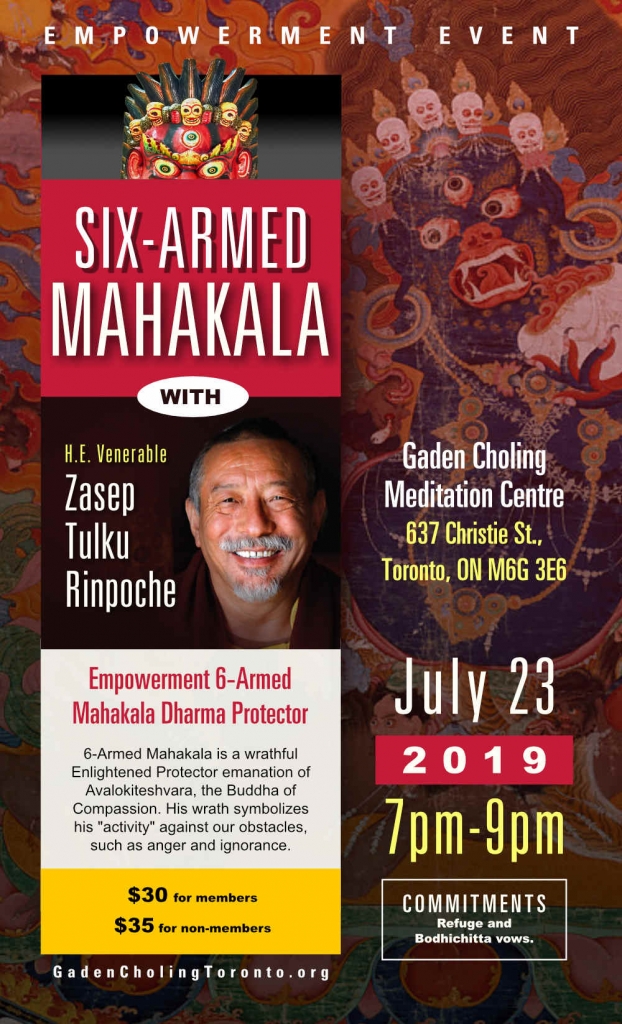 A very special and powerful practice for senior and serious students. This empowerment is being conducted on July 23 by H.E. Zasep Tulku Rinpoche from 7 pm to 9 pm ET.

Commitments for this empowerment are: Refuge and Bodhichitta vows.

Inset: The Three Principles of the Path 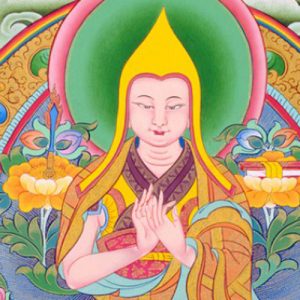 Homage to the foremost Lama.

1, I will explain as well as I can
The essential meaning of all scriptures of the Buddha,
The path praised by the excellent Bodhisattvas,
The doorway for the fortunate ones longing for liberation.

2, Whoever is not attached to the pleasures of mundane existence,
Whoever strives in order to make leisure and fortune worthwhile,
Whoever is inclined to the path admired by the Buddha,
Those fortunate ones should listen with a pure mind.

3, Without a completely pure renunciation
There is no way to stop seeking pleasurable effects in the ocean of existence.
Also, craving cyclic existence thoroughly binds the embodied beings.
Therefore, in the beginning renunciation should be sought.

5, If, having meditated thus, you do not generate admiration
Even for the prosperity of cyclic existence,
and if an attitude seeking liberation arises day and night,
Then renunciation has been generated.

6, Also, if this renunciation is not combined with the generation of
a complete aspiration to highest Enlightenment,
It does not become a cause of the marvellous bliss of unsurpassed Awaken State.
Thus, the wise should generate supreme Bodhicitta.

7, Samsaric beings are carried by the continuum of the four powerful currents.
Are tied with the tight bonds of karma difficult to oppose,
Have entered into the iron cage of the self grasping attitude
Are completely obscured by the thick darkness of ignorance,

8, Are born into limitless samsara, and in their births
Are tortured ceaselessly by the three sufferings.
Thinking thus of the condition of mothers who have come to such a state,
Generate the supreme altruistic intention to become Awaken one.

9, If you do not have the wisdom realizing the way things are,
Even though you have developed renunciation and Bodhicitta,
The root of samsara cannot be cut.
Therefore work on the means of realising dependent arising.

10, Whoever sees reality of cause and effect of all phenomena
in samsara and nirvana as infallible,
Thoroughly destroys the mode of misapprehension of
those objects and has entered the path that is admired by the Buddhas.

11, As long as the two realisations of appearances, The infallibility of dependent arising
And the realization of emptiness, the non-assertion,
Seem to be separate, there is still no realization
Of the thought of Shakyamuni Buddha.

12, When the two realizations exist simultaneously, without alternation,
And the view of the infallibility of dependent arising will entirely cease,
The mode of apprehension of the conception,
Then the analysis of the view is complete.

14, When you have realised thus just as they are
The essentials of the three principle aspects of the path,
Resort to solitude and generate the power of enthusiastic perseverance.
Accomplish quickly your final aim, my son.

NOTES
[1] “The Four Devils as Explained by Machig Labdron 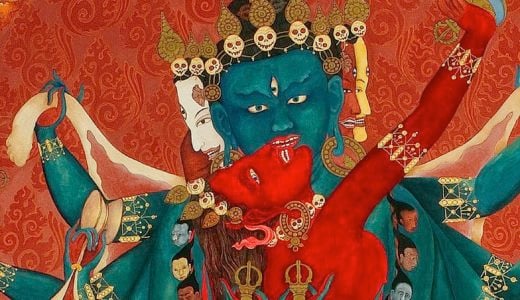 Tsog dates 2022 on Western Calendar: and, the meaning of Tsog (Tsok) — the non-ordinary blissful offering

The Three Svabhāva and The Five Dharmas: important core concepts from the Laṅkāvātara Sutra — full English Sutra at end of commentary

Interview with the Teachers / What the Buddhist Teachers Say